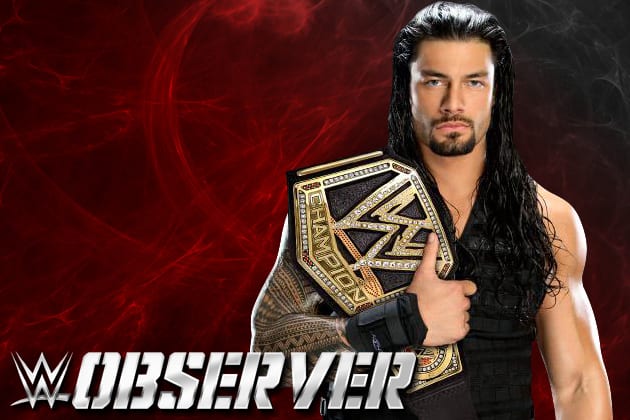 In the latest edition of the Wrestling Observer Newsletter, Dave Meltzer provides more details on Vince McMahon possibly changing the WrestleMania 31 main event to a triple threat match due to the negative fan reaction towards Roman Reigns. Vince & the officials have been telling people lately that they need to have video packages & promotional material for a threat threat main event between Daniel Bryan, Roman Reigns & Brock Lesnar at WWE WrestleMania 31.

Although this triple threat main event is not official yet, but things can go other way as well, Reigns vs Lesnar (which was the original plan) or Brock Lesnar vs. Daniel Bryan (very unlikely because Vince made Lesnar beat Undertaker so that he can pass the torch at WM 31 to a fresh guy, and Bryan is already an established superstar).

Dave Meltzer wrote the following about the 3 possible matches at WrestleMania :

“Those who have to know where things are going because this is a major event with a lot of publicity that needs to be in place, were told this past week that the Lesnar vs. Reigns match is being changed to a three-way. The reality is, that still could change until the 2/22 show in Memphis, where they have to come up with a finish for Bryan vs. Reigns to build the title match.

What’s notable is that after the Rumble, we were told that Vince McMahon was not considering changing from Lesnar vs. Reigns and that they had already done the three-way and Bryan win last year. But despite what is said publicly, the company often does react to what the crowds dictate, and this case is very similar to 1994, where Lex Luger was groomed to beat Yokozuna, and crowd reaction at the Royal Rumble led to that being changed to Bret Hart.

Lesnar vs. Bryan would be the strongest match, simply because Bryan is more popular than Reigns at this stage of the game. It would probably also be the best match.

Lesnar vs. Reigns is the weakest match, but it is the long planned match. It would still have Reigns, the guy who was scheduled to win the title, win it from a champion who has been booked strong, destroying both Undertaker and John Cena on big shows in 2014.

This week’s plan has the advantage of the outcome not being as predictable, particularly if Lesnar doesn’t sign a new WWE deal. But it also has major negatives, in the sense Reigns is likely to be booed more than the other two, and the original idea was that this show would kick Reigns off as the replacement for Cena as the company’s top babyface.

If the idea is that Bryan being in the Rumble was a mistake because it made Reigns a heel, the fact Reigns is doing the Fast Lane main event with Bryan, and if Bryan is in with him again at Mania, it’ll only make things worse. If the idea is to make Reigns a heel champion, having Bryan in the match may work the best, but it’s a gamble of whether it gets the right kind of heel heat. But that backfires because the whole idea was to create a new super babyface.

If Bryan was to win the title, it really would make more sense and be a better match, and mean more as a straight singles match. But they’d already booked Reigns to win the Rumble and may want to protect that idea to keep the value of the Rumble, the company’s No. 2 event of the year, strong.

Right now, Lesnar is a heel fans want to cheer for. Bryan is the most popular wrestler in the company, but also, for the first time, is clearly getting the beginnings of a backlash. Reigns is popular with girls and women, but the winning of the Rumble killed him as far as TV crowds went. At the arenas over the weekend, Reigns and Bryan were almost completely cheered, although there were attempts to boo Reigns in Jacksonville.

Bryan & Reigns had a lot of interaction at television, with Reigns acting as the subtle, and even not-so-subtle heel, and being booed. On Raw, whenever Reigns would hit a big move, the crowd would cheer the move, and then boo him. It was back-and-forth on him all night whether he was cheered or booed, but definitely more boos and at no point did he feel like a guy who should be top face, and it was never the super fervent cheers and super loud boos like Cena would get before TV crowds where it’s clear he’s the superstar on the show even though a lot of people don’t like him.

One person live said Bryan was cheered for the most part, but when he issued the line about how everyone knows I’m the better wrestler, that it was, at best, 50% cheers. Whenever he interacted with Reigns, Bryan was the one cheered.

If Reigns is made as a heel champion, on the guise that the plan is to eventually turn him face, the feeling is he’ll need someone to talk for him. While Paul Heyman would be that person, provided Lesnar doesn’t stay, politically, I can’t see them giving Heyman the full-time top heel to manage given The Authority are the focal points of everything on television now, so a top heel champion who isn’t Lesnar is more likely to be affiliated with Stephanie and HHH.

Furthering the idea of the three way, is that Ziggler, who was to face Bryan as of a just over a week ago and they both started pushing it on Twitter, that both have dropped that direction. Ziggler was put into a tag team with Ryback on Smackdown, but on Raw they used both as singles.”