On this day in 1995, the World Wrestling Federation aired the last ever episode of their weekly TV show ‘WWF Wrestling Challenge’.

This episode was pre-taped in Worcester, Massachusetts and featured matches & storyline segments on the the road to the ‘WWF SummerSlam 1995’ event, that took place later on the same day.

– Undertaker vs. Tatanka – From Raw

• Possible Spoiler For Next Week’s King Of The Ring Match

On this week’s RAW & SmackDown, Ricochet, Baron Corbin, Ali & Chad Gable advanced to the next round of the King Of The Ring tournament.

Below is what the updated King Of The Ring 2019 bracket looks like: 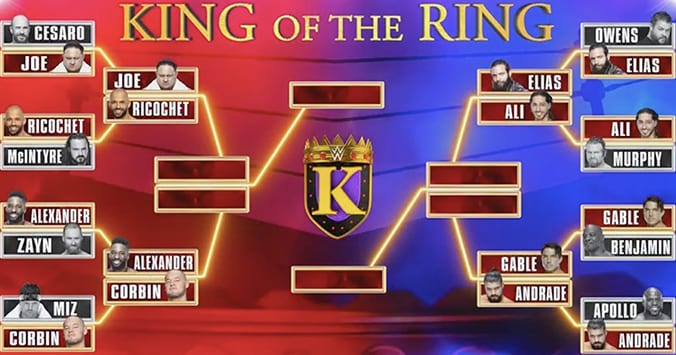 Baron Corbin vs. Cedric Alexander will now take place on next week’s episode of RAW in the next round of the King Of The Ring tournament.

According to the Wrestling Observer, WWE booked Cedric to injure his leg (kayfabe) during his match with Cesaro on this week’s RAW.

This storyline injury will now play a factor in his match with Corbin next week, where Corbin will take advantage of this injury to win the match and advance into the next round, while still keeping Cedric protected despite losing.