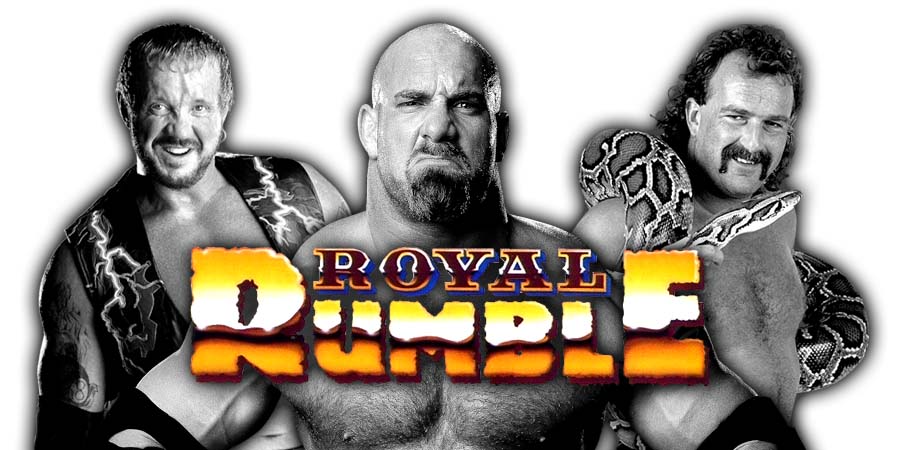 The Royal Rumble 2018 PPV is only a week away and the excitement is beginning to rise among the wrestling fans day by day! Let’s take a look at the possible surprise entrants in the Men’s Royal Rumble 2018 match:

As we have noted multiple times before, former TNA World Heavyweight Champion Ethan Carter III is about to sign a contract with the WWE. He was spotted at the Performance Center recently and was even pulled from an indy event that takes place on the same day as the Royal Rumble 2018 PPV.

What better way to bring him in, than him being a surprise entrant in the Royal Rumble match?

WWE really loves to bring him back for Royal Rumble matches, because his entrance with the Ho-Train gives the wrestlers in the ring a bit of a chance to relax, since the entire arena is focusing on the Hoes.

Most Old Schoolers would much rather see him enter this year’s Rumble match as Papa Shango though. It’s about time to bring that character back.

Ricochet is a famous cruiserweight wrestler on the independent scene all over the globe and was recently signed by the WWE. He is currently training in the WWE Performance Center down in Orlando.

Last year they brought in a 205 Live cruiserweight division wrestler as an unannounced surprise entrant, so why not go with him this year?

DDP still has a big & very loyal fanbase and always loves appearing in Rumbles or Battle Royals, whenever the WWE calls him.

Also a good chance to promote his DDP Yoga program again, so this is considered a win-win situation for both, the WWE & him. He also noted during a recent interview that he’s willing to appear in the 2018 Royal Rumble match if WWE gives him a call.

Not much of a surprise as the betting odds are currently showing him among the top favorites to win the Royal Rumble match, but who knows, that could very well be just Vince spreading false informations on purpose to “work the marks”.

Still a surprise if they ever let him wrestle again after his injuries, let alone win a Rumble, which would get him a title shot at WrestleMania. Highly unlikely!

With Montel Vontavious Porter already being announced for the RAW 25 anniversary show, there’s a good chance of him showing up as a surprise entrant in the Royal Rumble match.

He’s still wrestling on the indies these days and has some experience in such matches, after entering 3 previous Royal Rumble matches (2007, 2009 & 2010).

These days Shane’O’Mac usually likes to do some sort of angle that eventually leads to a WrestleMania match, so what better way than actually entering the Royal Rumble match and go from there?

There’s already storyline heat between him and Bryan, and even though it’s highly unlikely that Bryan will enter the match himself, he could still cost Shane the match by distracting him from the outside.

Although Bobby Lashley is finished up with Impact Wrestling, he’s still under contract with the company till February 1st. However, word going on is that he could get allowed to work for WWE before February 1st if WWE officials negotiate with Impact.

So if we look at the big picture, it’s obvious that ‘black Lesnar’, as many fans call him, is heading for another WWE run … so the question is just “when?”, not “if?”.

Lashley is no longer in a relationship with Kristal Marshall, who was the reason he had heat with WWE in 2007 and eventually left the promotion, so he’ll be back eventually, but what better way to bring him back than having him enter the Royal Rumble match as a surprise?

It’s about time for the charismatic Puerto Rican to return to World Wrestling Entertainment, so he would actually be a pretty cool surprise entrant in the Royal Rumble.

Just make sure to bring an Apple for the entrance, like he did during the Ruthless Aggression Era!

While Y2J is most likely busy with NJPW & Fozzy these days, so another run at this point in time seems impossible. They could at least bring him in for one night only, as a surprise during the Royal Rumble.

Fans love him, so that would do the job.

Okay, we admit this one is quite a stretch, considering the way he left in 1999 by holding Vince up for money (and he’s not The Ultimate Warrior, who did the same and has been forgiven).

But isn’t that exactly what a surprise entrant is all about? People shouldn’t expect him even being anywhere near the Royal Rumble, which makes for a great surprise.

Double J is no doubt a Legend in this business and has recently successfully finished a WWE sponsored rehab after being fired from iMPACT Wrestling a few months ago, so he’d be free to appear.

Seeing as Triple H always wrestles at WrestleMania every year, what better way to start that storyline than enterting the 30-man Royal Rumble match? There are already talks of him starting his WrestleMania feud with Braun Strowman at the Royal Rumble PPV.

After recently returning to in-ring action in WWE at the TLC 2017 PPV, it would make all the sense in the world for the WWE to bring this WWF Attitude Era Legend back for an appearance in the Royal Rumble match.

Kurt still got it, so they totally should book him into the match.

Being pre-announced for last year’s Royal Rumble match kind of killed a part of the awesomeness that a Royal Rumble entry by WCW Legend Bill Goldberg certainly had.

So what better way to get a gigantic pop from the Royal Rumble crowd than Goldberg’s theme playing when the next Wrestler is supposed to come out?

That alone would be a Royal Rumble moment for the ages. Period.

Same situation as above (Goldberg) … The Undertaker being pre-announced for last year’s Royal Rumble match kinda killed a part of the Hype, but it’s obvious why they had to do it – they wanted to sell out the Alamodome.

The Rumble match is a good chance to start off his WrestleMania storyline with John Cena, who could for example eliminate “The Deadman” from the match.

Taker is protected in this kind of a match anyway, as it’s basically kicks & punches for the most part, with few exceptions, like if you start or make it to the final 4.