A copy of a contract has leaked and it shows that in late 1997 the World Wrestling Federation owner Vince McMahon offered The Ultimate Warrior a 5 year contract and $750,000 minimum guarantee compensation.

That’s quite a deal, considering that Warrior was let go in 1996 after no-showing a couple of house shows, but keep in mind that the WWF didn’t win a single week of the weekly Monday Night TV ratings war and were in the middle of their rival company WCW having a 84 week winning streak.

Imagine all the legendary feuds we could’ve gotten if Warrior actually came back in 1997???

We’re talking legendary feuds, not by IWC Smark nerd standards as they only wanna count moves & support indy style spotfests, but we’re talking PROFESSIONAL wrestling here, which is ENTERTAINMENT ONLY and about drawing the most money, regardless of moves, holds & high spots.

Warrior was already a huge name and a larger than life legend at that point, so those feuds would’ve drawn a lot of money for sure.

Below is what the contract letter read:

I am prepared to offer you the following:

ROYALTY RATE: ROYALTIES TO BE PAID ON A 35% BASIS ON MERCHANDISE (EVERYONE ELSE IS PAID ON 25%) PLUS, STANDARD LICENSING RATE

WORKING DAYS: 14 PER MONTH FOR EVERYTHING

Jim, this deal is far more lucrative to you then our last agreement of 1996, and obviously, far more long term.

I look forward to building the resurgeance of the Ultimate Warrior again.

Below is a photo of this: 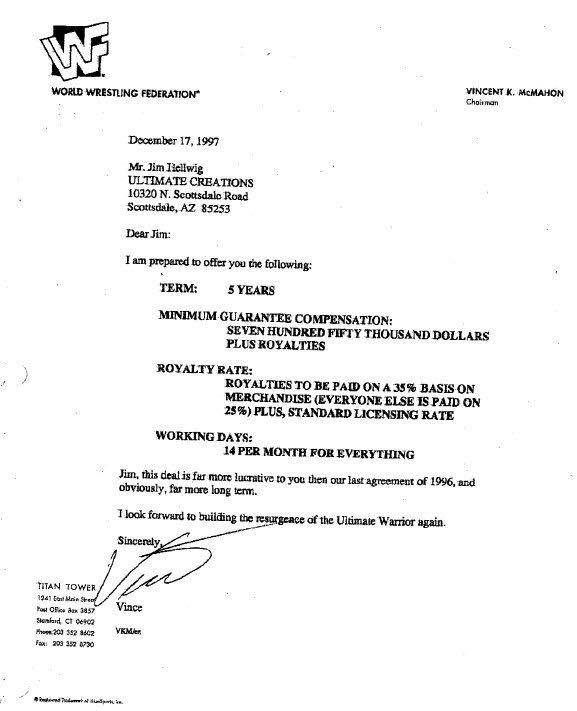 Elias visited the Complex Offices recently where he spoke with Olga and Mack to promote the “Walk With Elias” album that was released earlier this week.

The Drifter played his character throughout the interview and discussed various topics. Elias also shared the problem he has with Old School WWF Legend Chris Jericho.

Jericho appeared on the RAW 25 episode in January with his own guitar. He mocked Elias and added him to his list.

Below is what Elias said about Jericho:

“To be honest with you, I’m sick of Chris Jericho. I’ve had enough of Chris Jericho. I’ve seen him on my TV far too often. I’m the guy that plays guitar and sings on Monday Night RAW, and he shows up, tries to steal my act? It was OK for a quick laugh or something like that but on a personal level, the guy’s personality just rubs me the wrong way. His ego is just totally out of control, unfounded, and I can’t stand people whose egos are just not deserving. That’s all I can say.”

Elias also commented on superstars that compete in WWE on a part time basis: