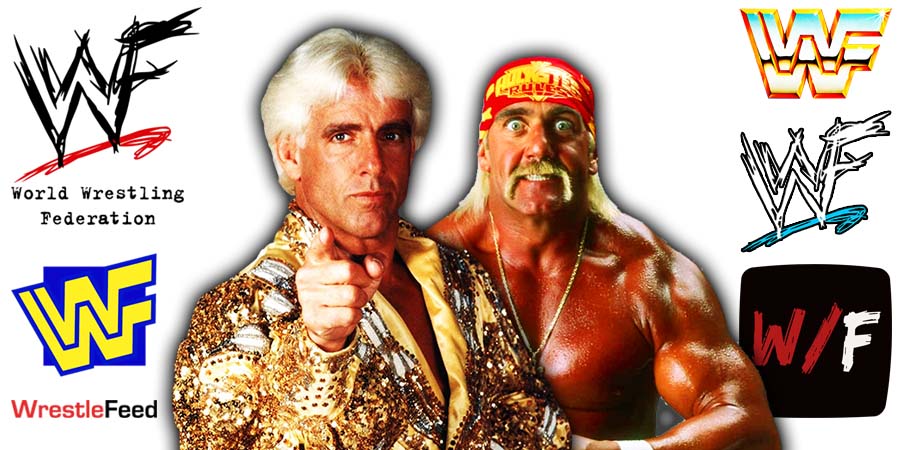 2-Time WWE Hall Of Famer Ric Flair (age 73) will return to the ring for his last match tonight.

He will team up with his son-in-law Andrade El Idolo to face the team of Jeff Jarrett & Jay Lethal.

During an interview on Chris Van Vliet’s Insight podcast, Flair was asked why he couldn’t get his former rivals Hulk Hogan (age 68) or Ricky Steamboat (age 69) to compete against him.

Below is what The Nature Boy replied:

“Well, neither one of them are physically able to do it.

I talked with Steamboat for a long time and he’s got issues with his back and his shoulder. I think that if Ricky wanted to go out, he had that great run with [Chris] Jericho back in 2009 I think.

I think Ricky wanted to go out with that memory, because he was as good back then as he was in his prime. He had some great matches and he liked the, ‘You still got it.’ Why put that on the line again?

And Hulk, he has had so many back surgeries, a double hip replacement, double knee replacement, why take a chance?

For me, everything is still hooked up still, thank God!”

Also Read: Charlotte Flair Has Talked Ric Flair Out Of Taking A Major Bump In His Last Match Tonight

1. Men on a Mission vs. The Brooklyn Brawler & Brian Costello