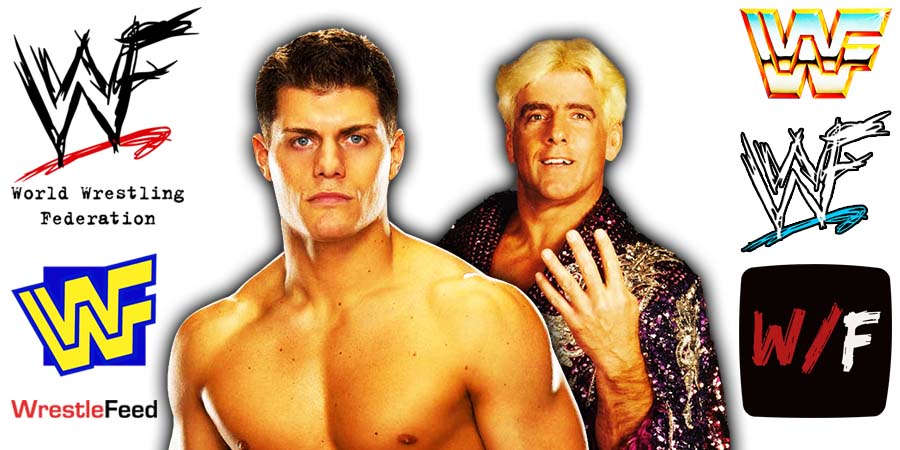 During an episode of his podcast, 2-time WWE Hall Of Famer Ric Flair discussed Cody Rhodes and his injury, and revealed how he’d book the return of The American Nightmare.

“Cody’s gonna be the champion sooner or later. I’m sure they’ll figure out a way to get that championship off where Roman has both of them — get one of them off him. I think the company functions better with two champions anyway.

“Absolutely, if that’s the time frame. Those things are very delicate. That tissue in there takes a long time to heal, and you can’t rush it. You’ve got to actually follow the doctor’s orders.”

If he’d book Cody to win the Royal Rumble and defeat Roman Reigns to become the Undisputed WWE Universal Champion:

“Yeah, unless somebody comes along miraculously. First of all, it’s hard to determine what they’re gonna do because there’s so many, with both companies [AEW and WWE] right now, moving parts.

Looking at it just from today, not knowing any more than I do as of this moment, that’s what I would do with Cody, yes.”

This episode was pre-taped at the Marine Midland Arena in Buffalo, New York and featured matches & storyline segments on the road to the ‘WCW The Great American Bash 1998’ PPV.

6. Lex Luger & Randy Savage vs. The Disciple & The Giant