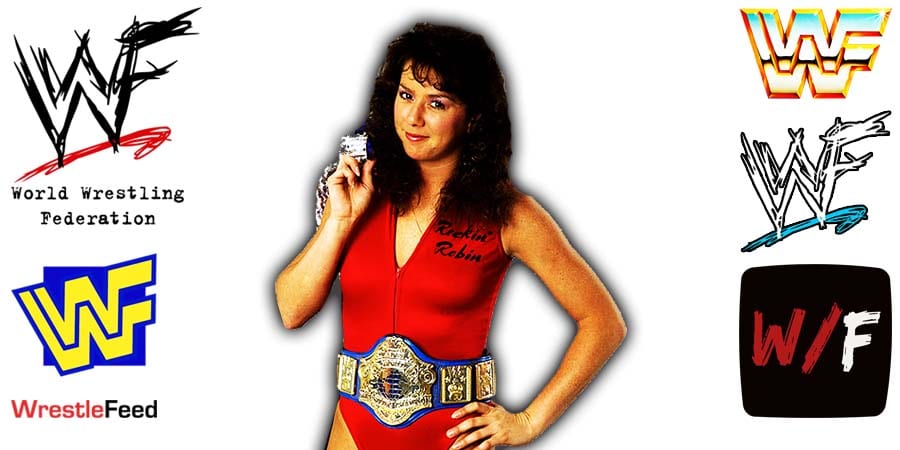 • Rockin’ Robin Lost All Wrestling Memorabilia In A Hurricane, Except For The WWF Women’s Title Belt

Old School WWF Veteran Rockin’ Robin was recently interviewed by Wrestling Epicenter about her appearance in the recent Dark Side of the Ring episode about her father Grizzly Smith and the horrible things he did, while he was still alive.

Robin, who’s the sister of fellow WWF Veterans Sam Houston & Jake ‘The Snake’ Roberts, revealed that she lost a lot of pro wrestling memorabilia in Hurricane Katrina, a horrible storm that lashed through her home state Louisiana in 2005.

Here’s what the former WWF Women’s Champion had to say:

“I was living in New Orleans. I had lived there for almost 12 years. Actually, my house was less than 2 miles from where the first levy breached.

I had a few boxes in the attic. It is probably just as well because the whole house, the water reached probably within a foot or two of the ceiling. That is how high the water line was.

But, I opened the boxes and low and behold, I had the WWF belt, the UWF belt, I no longer have that. A belt collector has that now, wink wink. And, I had a pair of boots with Rockin’ Robin on them. That is actually it. All of the outfits, all of the ring gear, nothing else made it.

Sometimes when I do signings, I still have the WWF Women’s Title Belt. After the women were over and done in the WWF and weren’t around, I spoke with someone, I think it was Pat Patterson, he told me I could no longer say I was the WWF Women’s Champion. I had to say former champion, yada, yada, yada.

Rockin’ Robin wrestled for the World Wrestling Federation from late 1987 until the summer of 1989, which was when the company retired its Women’s Division.

Today would have been the 62nd birthday of Old School WWF Legend The Ultimate Warrior (Jim Hellwig).

The biggest moment of Warrior’s entire career came in the main event of the WrestleMania VI PPV in 1990, where he defeated “The Immortal” Hulk Hogan clean in the middle of the ring to become the new WWF World Heavyweight Champion.

In 2014, he was inducted into the WWE Hall of Fame by Linda McMahon, just a few days before he passed away.