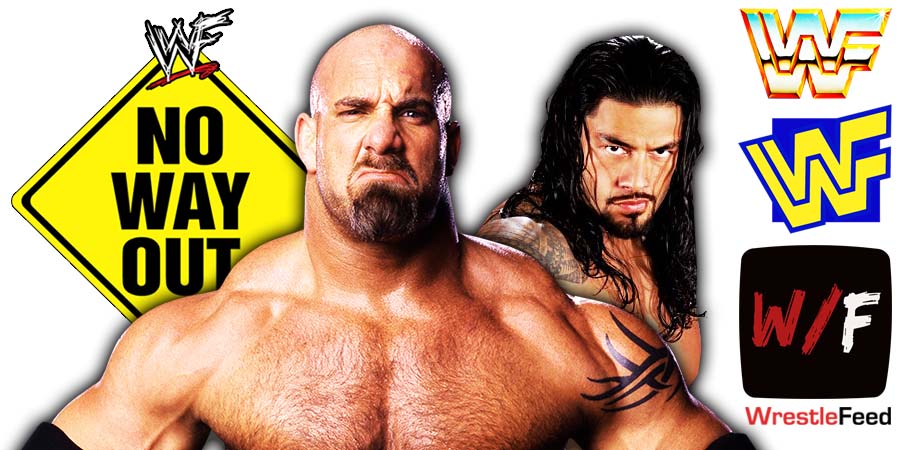 WWE Hall Of Famer Goldberg appeared on this week’s episode of WWE’s The Bump to talk about his upcoming match against Roman Reigns for the Universal Championship.

On why it’s easy for him to have a feud against Roman Reigns:

“All I really had to do was remember back in the days when I’d line up against the offensive guard for Georgia Tech, and looked into his eyes, and wanted to take his soul on the first snap. It’s pretty much the same thing. He [Reigns] went to Georgia Tech, I went to Georgia, it’s quite easy to remember those days.

You know, a couple years ago he got away, I don’t know how he got away from me, but any time you got the opportunity to go up against a guy like Roman, a champion like him, a guy that represents the brand so well, it’s an honor and a privilege, and any point in your career, you would be honored to fill that spot.

So, it just so happens that now’s the time, so I’m not going to miss that opportunity by any stretch of the imagination, and I do believe that when I look Roman straight in the eyes, he feels a little bit of that fear, for sure.”

On if he’s going to pass the torch to Reigns:

“Well, no question. I mean, as much disdain as I have for Roman and his position right now, I do ultimately respect him because he followed in the footsteps of guys like myself and The Rock.

Granted he will probably be much more successful than myself, at the end of the day it’s not only the physical attributes, but it’s the mental aspect of the game. I’m about 10 days away from game day and right now I’ve already made the transition to Godzilla.

It’s tough to be around me at this point, in a lot of respects, but I know where I have to be and I have to be in the zone, and I have to bring 1,000% of what Goldberg used to be, and what he currently is, to be able to compete against a guy like Roman right now.

But I can do it, I have faith in myself, and truthfully, I’m doing it for guys like Ron [Simmons], I’m doing it for all the guys who stepped before me because I’ve got the torch right now, and one of these days I get to hand it off, but right now Roman actually wants to steal it from me, and I’m not going to let him do it.”

On Roman being different than what he was 2 years ago when they were scheduled to face off at WrestleMania 36:

“First and foremost, I’m batting 1000 against his family. Let’s think about it. I’ve never lost to anybody he’s related to, so that’s something I want to carry on, and true, he’s quite a different character-athlete than two years ago.

He’s progressed, he’s evolved, and he’s much more dangerous than he was back then, and I probably have gone the other way, but I’ve always said that 70% of Goldberg is 100% better than 99% of the people out there.

So, I still believe that I can rip his face off, and as long as I think that here (in my head), as long as I’m prepared as much as I can be physically for it, it’s still attainable.”

Also Read: Will Goldberg Retire From WWE At Elimination Chamber 2022?

After touring the independent scene during the 90s, he arrived in the World Wrestling Federation in 2000 and wrestled as a ‘Jobber To The Stars’ in dark matches, but also on several episodes of the weekly TV show “WWF Jakked” / “WWF Metal”.