It was announced on tonight’s episode of Raw that 16 time WWE World Heavyweight Champion John Cena will return to WWE programming on the July 4th edition of SmackDown Live as a “Free Agent”.

This likely means that Cena will now have feuds on both Raw & SmackDown Live and this is kind of like The Undertaker’s style (where he appeared on SmackDown Live in 2016 and called the “blue brand” his home, but then appeared on Raw in 2017 to feud with Raw Superstar Roman Reigns).

Below is the graphic for “Free Agent” John Cena: 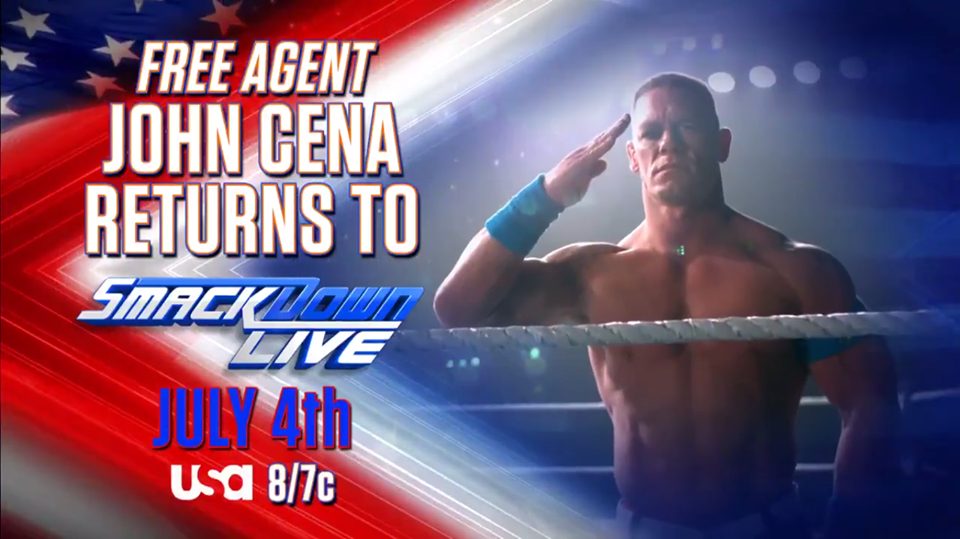 John Cena to return as a Free Agent on SmackDown Live on July 4, 2017

Speaking of Cena, below is what WWE posted about him getting a new temporary haircut:

You can’t see him, but he that doesn’t stop him from giving the scoops!

John Cena blessed the WWE Universe with a Facebook Live ahead of the season premiere of “American Grit” and revealed a major change … a new haircut! However, The Cenation Leader relayed that the new look is only temporary as he finishes up an acting project and he’ll be back to his vintage look ahead of his return to WWE on SmackDown LIVE on the Fourth of July.