– The Ultimate Warrior vs. El Conquistador

While speaking to TMZ, Roman Reigns talked about his time off from WWE programming, and when he plans to return to the ring.

On the real reason he’s been off TV:

“I’m doing good. A lot of people, you know, they think that it was based off of my health and the history of my fight against leukemia, but just talking to my doctors and stuff, I actually am fine, and my immune system is good.

The drugs that I take in order to fight the leukemia, they don’t attack your immune system, but not everybody knew because I try to keep it private in this crazy world, but my children, you know, we just had two newborn twin boys, they’re eight weeks old, so I had to make a decision for them, and I love this business…if anybody ever questions if I love this business, go back about a year and a half ago.

I came back as fast as possible. I could’ve took a lot longer off to focus on my health, but they told me, ‘Yeah man, you should be fine if you want to get in the ring and do your thing, if you want to get back to normal.’ And I jumped as soon as they gave me the green light, so…

This is bigger than me, it’s my family, it’s my children. They are my legacy. No matter what I do in this world, my children are gonna be the ones that represent my name and carry our name forward. So, I had to make that choice for them, to protect them being so young, but we’re doing good.”

On missing his job:

“It’s tough because I want to be out there, I want to… don’t get me wrong, it’s weird to see the show in front of no one, but I want… yeah, you know what I mean, it’s strange because we sell the atmosphere.

There’s nothing like being at a WWE show when the house is packed and the crowd is going nuts. It’s unlike anything I can…there’s no comparison because of the unison…and it’s all like a home crowd, you know what I mean? It’s not like a split crowd, it doesn’t get quiet. If it gets quiet out there, then that’s on the Superstars, something’s going wrong.

But yeah, man, I miss it. I wanna be out there, I wanna get back to work, I wanna get back to normal but I just feel like I have an obligation, not only to my family and myself, but to my community, and also to set the example because at the end of the day, we can do a lot of different things and say a lot of different things, but it’s through our actions that really speak volumes, and that’s what I’m trying to do.”

On when he plans to return to the ring:

“Really, to be honest, I don’t know. We’re just going day by day, taking this thing how it comes. It’s…we’re in weird times. These are brand new times for us, this is a new normal, and we’re just trying to collect as much information and make the most educated choice possible.

Below is a photo of Reigns spending time with his kids: 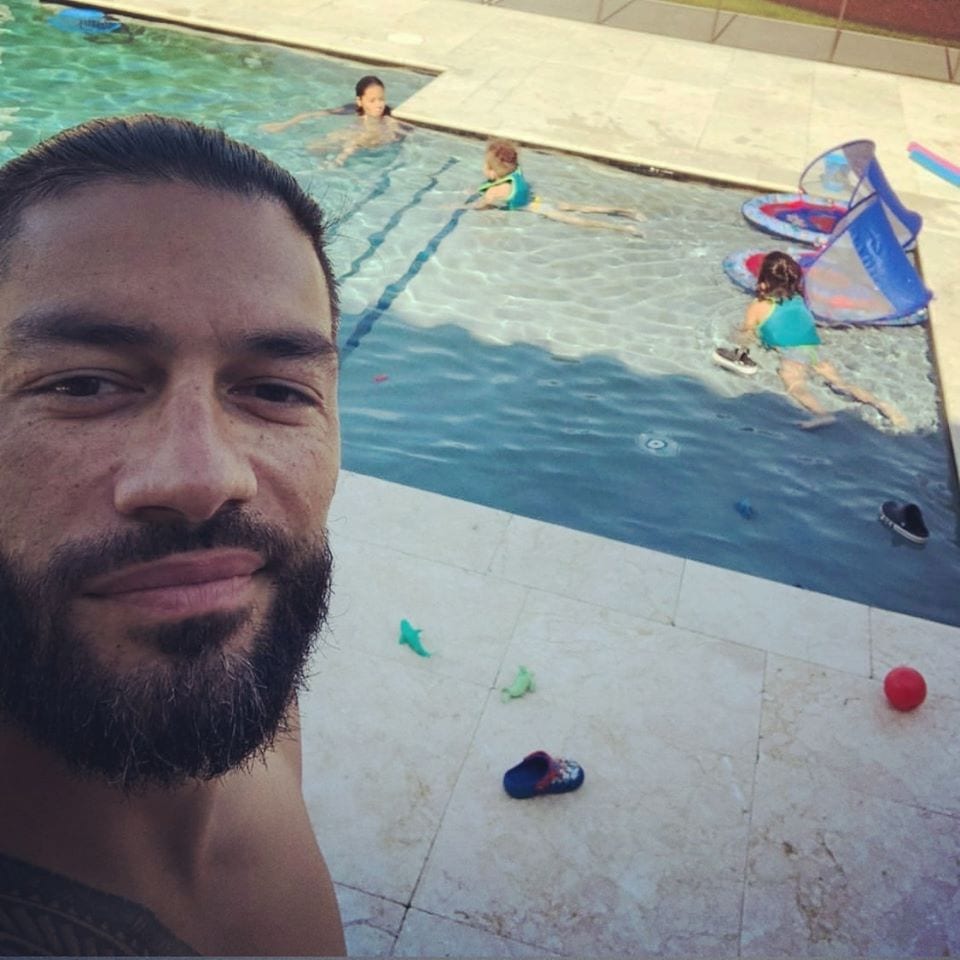