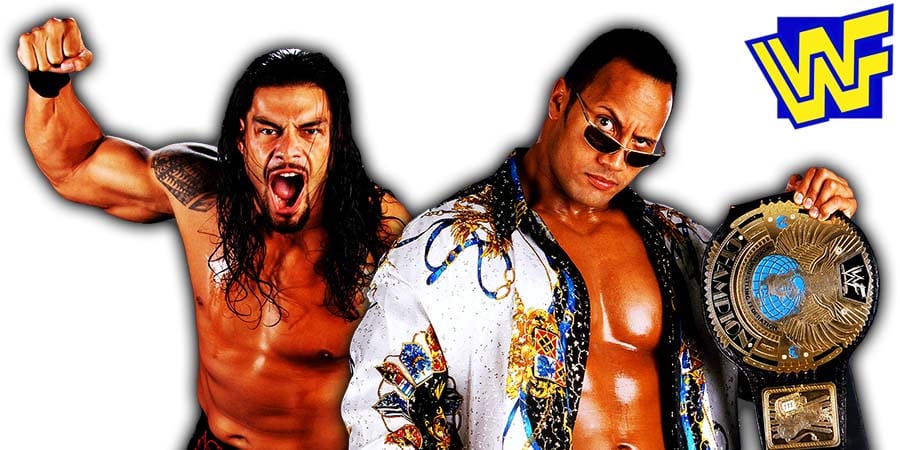 On the latest episode of his weekly ‘Jim Cornette’s Drive Thru’ podcast, WWF Legend James E. Cornette compared Undisputed WWE Universal Champion Roman Reigns to The Rock, based on the recent “Ucey” promo segment on SmackDown.

Here’s what Cornette had to say:

“Both Roman and Jey were trying and Jey is covering his mouth up, like he is looking down, fighting with his inner demons.

Finally, at one point, Roman puts his arm around [Jey] and said, ‘If you can’t find your inner ucey again’ and Jey tries to turn away from the camera and Roman says, ‘No, no, come on back here.’

When he is doing that Roman sounds like The Rock, talking personally and just talking to him, he has that. Not even in the same kind of tone in his voice but the same kind of inflection or delivery or whatever I’m trying to say.”

The Rock is heavily rumored to challenge his real-life cousin Roman Reigns for the Undisputed WWE Universal Championship in the main event on Night 2 (April 2, 2023) of ‘WWE WrestleMania 39: Hollywood’ at the SoFi Stadium in Inglewood, California.

Their family member Lance Anoa’i, son of WWF Veteran Headshrinker Samu, was recently interviewed by Bill Apter and stated that he thinks Reigns is going to overcome The Rock by successfully defending his Titles in that match.

“That rumor or that dream match or whatever you want to call it has been in the ears of everybody for a long time.

Whether it will come to (fruition) or not, who knows but knowing WWE, they’ll probably do whatever it takes to make it happen.

I would pick Roman. I feel that he has the youth, the strength, and the time to dedicate to fans of the wrestling federation.”

The Ucey segment was very popular and ended up drawing over 20 million views on Social Media!

Below are video highlights from that segment:

This episode was broadcasted from the Target Center in Minneapolis, Minnesota and featured matches, interviews & storyline segments on the road to the ‘WWE Survivor Series 2005’ PPV.