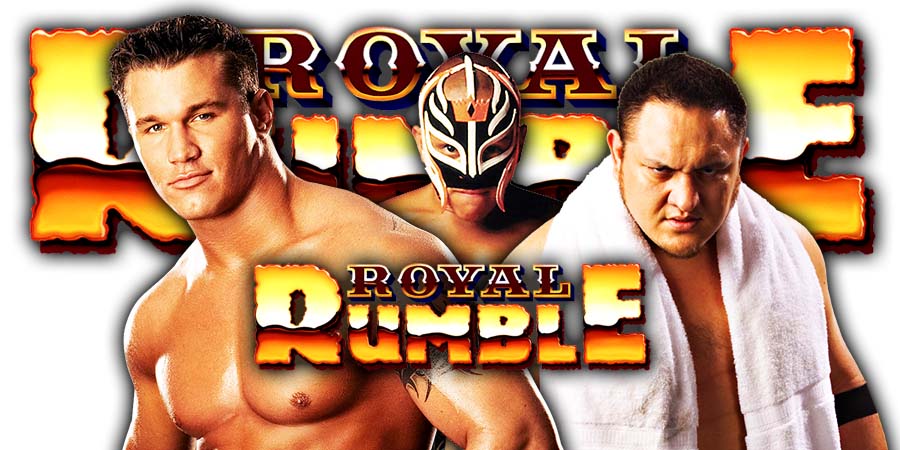 Up next is the main event of the evening – it’s the Men’s Royal Rumble 2019 match.

Elias & Jarrett say the match will begin with a musical performance by them, but Elias ended up attacking Jarrett.

Jarrett is rattling Elias with strikes, but Elias lays him out with a clothesline. Elias smashes his Guitar on Jarrett’s back and then eliminates him.

#9 is Curt Hawkins. Hawkins is on a 256 match losing streak. Hawkins is now hiding under the ring.

#11 is Titus O’Neil. He teases that he’s gonna fall again, but he stops and then slides under the ring when he sees Curt Hawkins is in there. Hawkins & Titus both enter the ring from the other side and Hawkins eliminates Titus and then Joe eliminates Hawkins.

#12 is Kofi Kingston of The New Day. This is Kofi’s 12th Royal Rumble match.

#13 is Mustafa Ali. Ali mocks Nakamura’s “Come On” taunt and then eliminates him!

#14 is Dean Ambrose. Ambrose & Rollins go at it as soon as Ambrose enters the ring.

Ambrose kicks Kofi out of the ring and Kofi saves himself in a unique fashion once again.

#15 is No Way Jose. Joe eliminates Jose immediately. This might be a new record.

Lashley is angry and he pulls Rollins out of the ring and attacks him. Lashley slams Rollins through the announce table!

#TheAllMighty @fightbobby got eliminated in a HURRY, and that means BAD THINGS for @WWERollins as the Men's #RoyalRumble Match continues! pic.twitter.com/nV5CDqDGdd

#28 is Dolph Ziggler and he eliminates McIntyre!

#29 is Randy Orton. Orton goes for the RKO on Strowman, but Strowman counters and Powerslams him.

ONLY in the #RoyalRumble Match!

Strowman goes running after Orton in the corner, but Orton moves out and Strowman crashes out of the ring.

#30 is R-Truth. He earned this spot by winning the WWE Mixed Match Challenge. Nia Jax comes from behind and attacks Truth.

Nia Jax is entering the Men’s Royal Rumble 2019 match in place of R-Truth!

Nia lays out Ziggler, Andrade & Rey Mysterio! Nia is now face-to-face with Mustafa Ali and she delivers a Headbutt and then eliminates him!

Orton & Nia are now face to face! Orton goes for the RKO, but Nia pushes him away and then lays him down with a Shoulder Tackle.

Ziggler nails a Superkick on Nia, then Mysterio nails a 619 and then Orton RKOs Nia!

Ziggler & Andrade are left in the ring, while Strowman & Rollins are laid out on the outside.

Strowman enters the ring and lays out both Ziggler & Andrade. Strowman lays out Rollins on the outside as well. Strowman now brings Rollins in the ring as well.

Ziggler, Andrade & Rollins team up to take down Strowman. All 3 men try to eliminate Strowman, but Strowman picks up Andrade and throws him out. Strowman eliminates Ziggler as well.

Rollins hits a Curb Stomp on Stromwan on the apron and Strowman falls down!