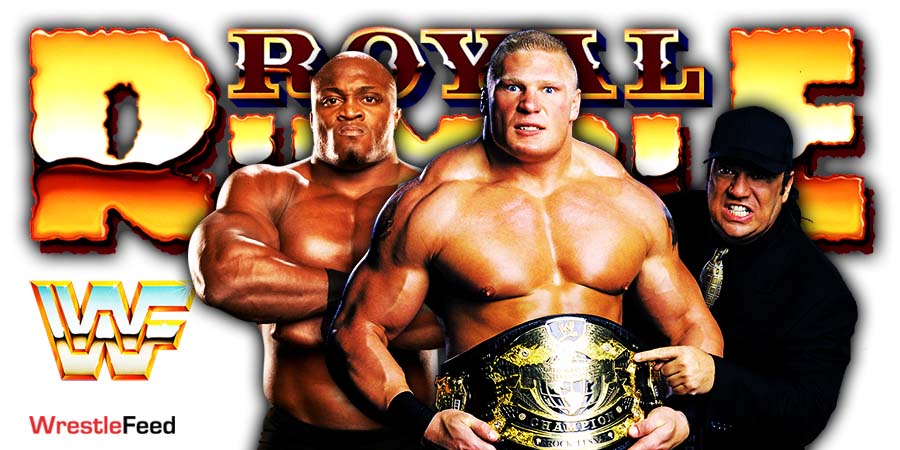 Ronda Rousey just won the Women’s Royal Rumble match and will main event one of the nights of WrestleMania 38.

Up next is the RAW Women’s Championship match between Becky Lynch and Doudrop. The crowd is dead for this match.

After back & forth action, Becky hit the Manhandle Slam from the second rope to pick up the win.

The WWE Universe is out in full force in St. Louis! #RoyalRumble pic.twitter.com/Bw0fJFaaAp

Lashley is wearing white tights tonight on this special occasion. He has waited for this match to happen for a long time.

They start with a lock up, but no one can out-power each other. They lock up again and Lesnar hits a German Suplex!

Lashley suplex Lesnar this time and he landed on the back of his head! Lesnar hits 2 back-to-back suplexes to Lashley and Lashley landed on his shoulder. Lashely is also bleeding from his lower lip.

Lesnar goes for the F5, but Lashley counters and hits a Spear! Lashley hits another Spear and Lesnar gets out of the ring after this.

Lashley goes running for another Spear on the outside, but Lesnar gets out of the way and Lashley goes through the barricade.

Lesnar tries to hit an F5 on the outside, but Lashley counters and sends Lesnar head-first into the steel ring post.

Brock goes for the F5, but Bobby counters and locks in the Hurt Lock! Lesnar breaks it up by pushing Bobby into the corner into the referee.

WOW. @BrockLesnar and @fightbobby were literally trading Hurt Locks and F-5s … until it took out the ref! #RoyalRumble pic.twitter.com/LGxFzfIQsu

Roman Reigns interferes and spears Brock Lesnar! Roman stares down at Heyman and tells him to hand him the WWE Championship belt and he does. He hits Lesnar in the head with the belt.

Heyman leaves with Roman and Lashley pins Lesnar to win the match!

Due to Roman Reigns' interference, Bobby Lashley pinned Brock Lesnar to win the WWE Championship at the #RoyalRumble

Also, Paul Heyman is BACK WITH HIS TRIBAL CHIEF. pic.twitter.com/x7j3cLEs0v