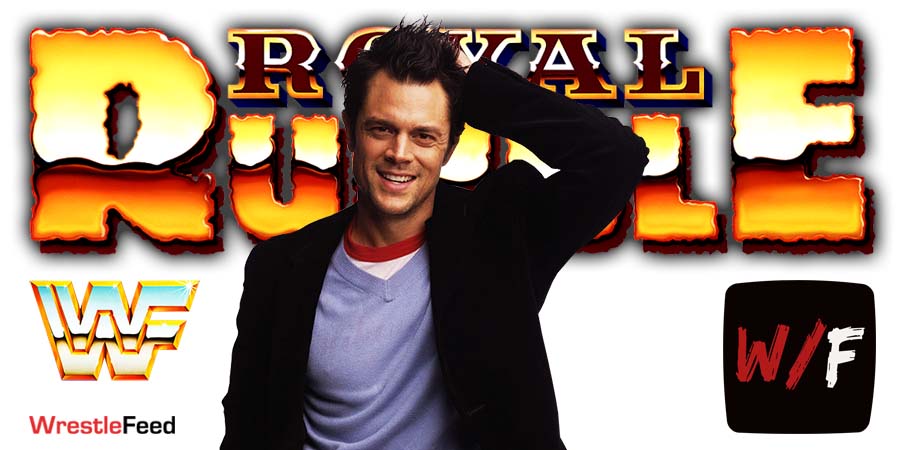 Up next is the main event of the evening and it is the 30-man Royal Rumble match!

AJ Styles is entry #1. He did the Shawn Michaels flexing pose on the entrance ramp. #2 is Intercontinental Champion Shinsuke Nakamura.

#9 is Johnny Knoxville and he comes with the cast of Jackass Forever. Knoxville enters the ring and takes down Zayn and hits him with an Elbow Drop!

Knoxville slapped Styles next and told him to bring it and Styles laid him out with a 5-piece combo, ending with a Lariat. Montez then hit him with the Frog Splash!

Holland placed Knoxville on the ring apron and Zayn eliminated him with a Helluva Kick. Styles then eliminated Zayn.

#10 is Angelo Dawkins. #11 is Omos and he eliminates The Street Profits.

#16 is Dolph Ziggler. This is his 15th Royal Rumble match. AJ eliminates Theory.

#19 is Madcap Moss. This is his 1st appearance in a Royal Rumble match. He eliminates Styles. He was in the match for 29 minutes.

#20 is Riddle. #21 is Drew McIntyre. The former WWE Champion is back early after facing neck issues.

Owens and McIntyre begin brawling and Owens lays Drew out with a Pop-Up Powerbomb.

#23 is Rey Mysterio. #24 is Kofi Kingston. Kofi did another Rumble stunt, but he failed as his feet hit the floor.

Bunny then laid out Riddle with a Canadian Destroyer! Sheamus then tried to eliminate Bunny with Brogue Kick, put he ducked and Sheamus went out of the ring!

Rey hits the 619 on Ziggler and Bunny then throws Ziggler out of the ring. Owens hit Buny with a Stunner. Otis eliminates Mysterio.

#29 is St.Louis’ own – Randy Orton, who is looking to tie Stone Cold Steve Austin with a 3rd Royal Rumble victory.

Bunny is holding the bottom rope in the corner and doesn’t want to fight anyone right now.

#30 is Brock Lesnar and Riddle is shocked to see him! Lesnar laid out Orton, Shane & Riddle. Lesnar then eliminated Orton.

Bad Bunny is scared and Lesnar F5s him and eliminates him. Lesnar eliminates Riddle & Shane. Lesnar threw Riddle like he was nothing.

Lesnar & McIntyre are the final two and Lesnar F5s McIntyre out of the ring to win the match!

The ring announcer announces that Lesnar will main event WrestleMania 38!