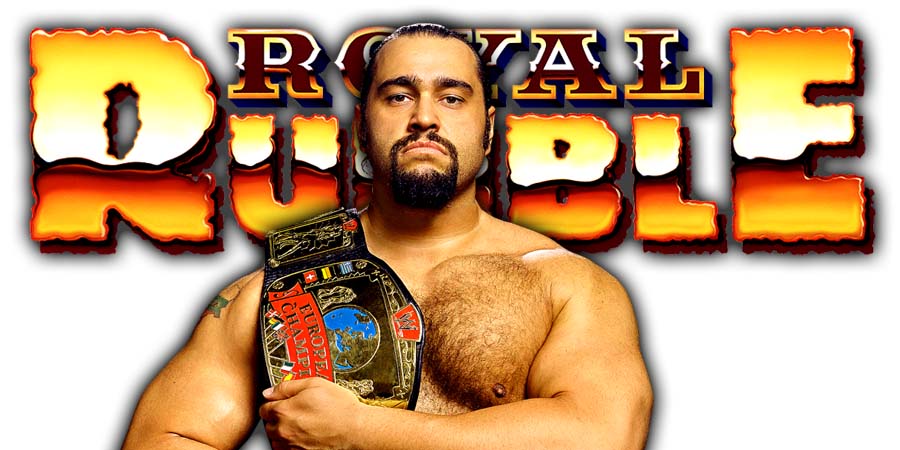 According to PWInsider, former WWE Cruiserweight Champion Hornswoggle was originally scheduled to wrestle a match with Rob “The Giant” Araujo on the Greatest Royal Rumble Kickoff show.

However, plans changed and Hornswoggle was put as a surprise entrant in the 50 man Royal Rumble match.

For those who don’t know, Rob appeared as as announcer named “JB-Elf” during the WeeLC match between Hornswoggle & El Torito on the Extreme Rules 2014 Kickoff show.

Rob was brought to Saudi Arabia for this match, but ended up not being used.

Michael Cole made a big botch at the Greatest Royal Rumble event when he was talking about former WWF Champion Sgt. Slaughter.

It should be noted that Sgt. Slaughter is not dead and is doing fine.

NXT wrestler Ricochet has revealed that his NXT finisher’s name is “Vertigo”.

• Rusev & Aiden English Comment On Getting Beat Down By The Undertaker

Saudi Arabia celebrates #RusevDay ….. of course. Caskets is definitely not my thing. Nothing but respect for the Undertaker

While the legendary Deadman thwarted my #WWEGRR efforts – believe it when I say it’ll take a lot more to keep me down, kids.

Trust me – last night the starry eyed kid, who always dreamed of throwing on a pair of tights and boots, was smiling…all the way to the grave. pic.twitter.com/SB7TQ7Sslu