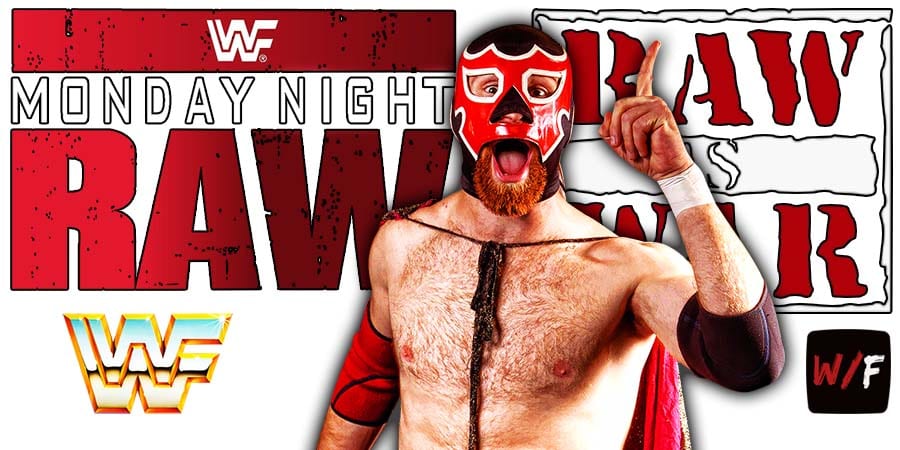 SmackDown wrestler Sami Zayn recently spoke to SK Wrestling and talked about a 2019 incident, where he said “AEW” during a LIVE episode of WWE Monday Night RAW.

In May 2019, Zayn had an “Electric Chair” Q&A segment with Corey Graves in the ring, where Sami would answer questions from people in the crowd and he mentioned to the fans that they could ask him about anything, “even AEW”.

Here’s how the former Intercontinental Champion recalled the backstage reaction to him mentioning the rival promotion LIVE on the air:

“So it wasn’t entirely, entirely off the cuff but it was off the cuff to a certain degree, and the reaction was, let’s say unfavorable since the electric chair met its demise that very same week.

And they tell me that we’re doing this segment where it’s legitimately, you know, unplanned questions and anybody could ask anything.

So at the time this was the number one topic in the wrestling world. So you kind of expected to be asked about it.

What they were going for was that it had a very risky, unpredictable feel to it, as I was out there, I was like, this doesn’t have these vibes, these questions are too sterile.

So I felt like it was upon me, it was incumbent upon me, to sort of make it controversial. And the fact that we’re talking about it now, all this time later, you know I hate to say I was right, but I kind of think I was right to do it.”

On this day in Pro Wrestling history on February 23, 1992, the World Wrestling Federation held a televised house show in the world’s most famous arena, Madison Square Garden in New York City, New York.

This live event featured matches on the road to the ‘WrestleMania VIII’ PPV.

The Undertaker defeated The British Bulldog