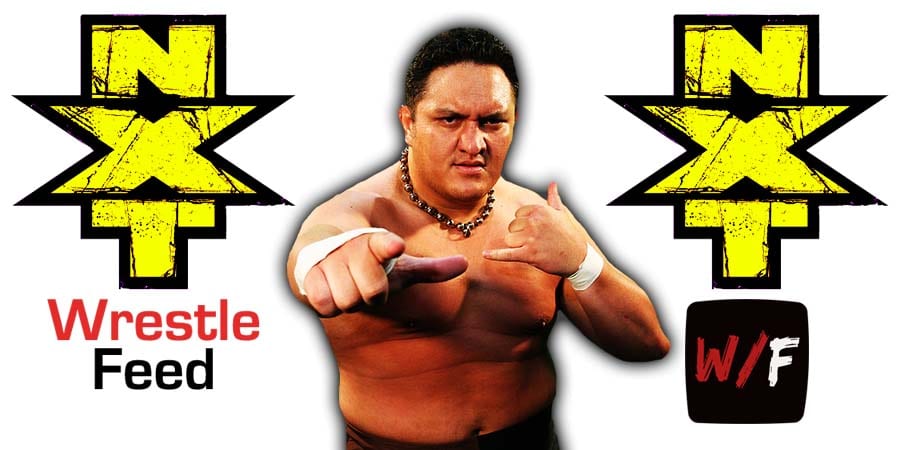 TNA Veteran Samoa Joe was recently released from his WWE contract, but got rehired by Triple H for the NXT brand right away, where he debuted as the enforcer of NXT General Manager, Old School WCW/WWF Legend William Regal.

In an interview on the ‘Out of Character’ podcast, Joe talked about his release, his return and in-ring future.

On his release & return to WWE:

“It was weird. Johnny [Ace/Laurinaitis] called me, and I thought it was a rare call from Johnny. ‘Hey, what’s up Johnny? How are you doing?’ and he told me, ‘Hey listen, we’re going to have to release you from your contract.’ And I was like, ‘Okay. Cool.’ [And Johnny said], ‘Hey Joe, we think the world of you and would love to work with you again.’ And I was like, ‘Alright, absolutely Johnny.’

And honestly, I did have a bit of understanding, obviously at the time, dealing with injuries, coming back and getting ready to get my rehabilitation going and all that stuff. And we’re in a pandemic and all this other stuff. I got it. It wasn’t expected, but at the same time I was relatively calm about it. I’ve kind of been in this situation before.

A younger me probably would’ve been really freaked out. But at this point you just roll and pivot. That’s really all there is to it when it comes to life in general. That’s kind of the mantra I’ve kept, so at that point I think I was kind of already in the works of setting up the next frameworks of what I was going to do.

A few hours later I get a call from [Triple H] and [it] pretty much all kind of changed. I had sent some company farewell texts to some people I genuinely enjoyed working with, and just something general, like, ‘Hey thanks, and I’m sure we’ll talk down the road at some point.’ And I got a text back, ‘Hey, give me a minute. I’m getting out of a meeting.’ Then we had a brief conversation, which was essentially, ‘Give us a bit of time, I’ll work out a package and we’ll be talking soon.’ And I said, ‘Alright, that’s totally fine. I have no problem with that.’ And it led to my return back to NXT.”

On Triple H offering him a new role in WWE:

“A lot of it was that me and Triple H had spoken about this transition in-depth. It wasn’t just coming back to NXT and being an enforcer and having a role on the show. Now I’m working in the talent scouting department, a few more administrative things behind the scenes, so it’s a little bit of a transition for me too, into some of the other aspects of the business of the WWE.

So, it’s kind of an evolution of my journey. I’ve gone to the commentary, the production, now I’m working a bit more on behind-the-house types of things. It was a really great, cool opportunity that Hunter offered me. And still performing here in the bounds of the WWE. So, it was a nice understanding that we’ve come to and I’m really excited about some of the projects we’re going to be working on.”

On if he’s working on returning to the ring as a wrestler: