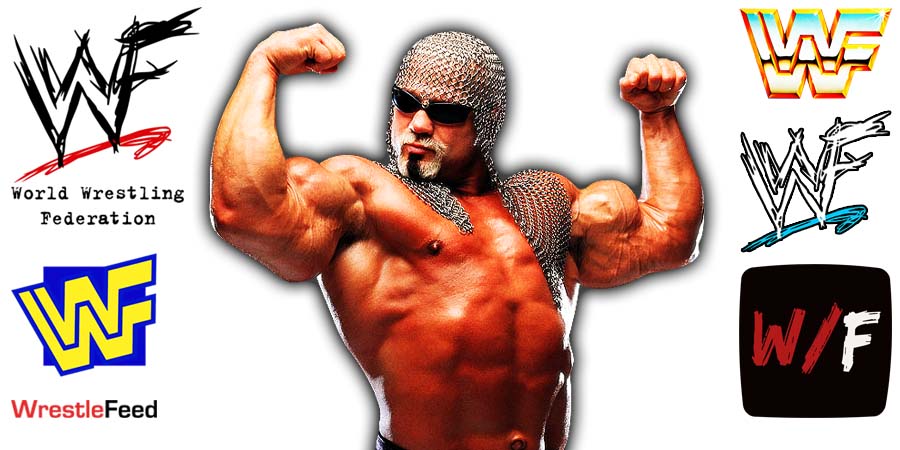 “Big Poppa Pump” Scott Steiner had heat with WWE for many years.

During an interview with Sitting Ringside in 2020, Steiner said the following about Triple H:

“Same thing went wrong [for me] that went wrong for everyone else that went from WCW. Look what he did, Triple H beat everybody.

Kevin Nash went in and look what he did – he had a DQ and then he got beat. Sting got treated worse, he had one match with him and he was done.

That’s the thing when a guy’s a mark and he wants to beat everybody and he was a legitimate pu**y. I mean, Wikipedia don’t lie. I mean seriously. Look what he’s done…nothing!

Of course, it does help banging the boss’ daughter so you know, he took advantage of everything that he could and he beat everyone from WCW. Why?!

They treated everyone like sh*t and we’re all in the same business. You know, wrestling is a small knit community, you know it’s a brotherhood. But you’re gonna treat us bad because we wrestled for somebody else? I mean it made no sense but now it’s biting them in the a$$.

They would kill — f**king kill for half the ratings that they had when we had the Monday Night Wars. Look at them, it’s biting in the a$$ and f**k them. They got what they deserved.”

Also during an RF shoot interview in 2005, Steiner revealed that WWE wanted him to take a drug test in 2002. He agreed to take it, but wanted Triple H to take the test with him. WWE didn’t test Steiner after this.

In 2019, Steiner said the following about the WWE Hall Of Fame:

The Steiner Brothers (him and his brother Rick Steiner) were inducted into the WWE Hall Of Fame this year. NXT Champion Bron Breakker (Rick’s son and Scott’s nephew) inducted them.

During a recent interview with The Detroit News, Scott said the following about no longer having heat with WWE: