We noted before WrestleMania 35 that Seth Rollins & Becky Lynch are the newest real-life couple in WWE.

They appeared at the WWE Hall of Fame 2019 ceremony together and have appeared together at some other events as well.

However, they never officially announced that they are now dating and Rollins refused to comment anything on this relationship during a recent interview.

You can check out the Twitter exchange between Becky, Beth & Edge below:

No worries @BeckyLynchWWE …I’m just glad that we are friends and not steaming over a silly little detail like being tied for number of title reigns. Cheers! https://t.co/ypXjz2ZQkT

Listen The Man, you’re doing good for yourself now kid. But we can all find the footage of your steampunk phase, with a familiar entrance where you attempt Edge lite. And fail. Sooooo begone with you. https://t.co/O6BaWb99Ac

Yeah, no, you’re right, Edgester. They want me to be nicer on social and I forgot. On this day, I see clearly.
Everything has come to life. Pals?

“I guess I’m allowed to post this now…. Becky Lynch?”

I guess I’m allowed to post this now…. @beckylynchwwe ?

Below is how some WWE stars reacted to this: 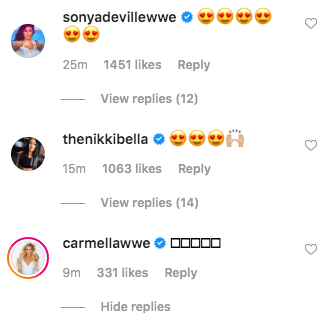