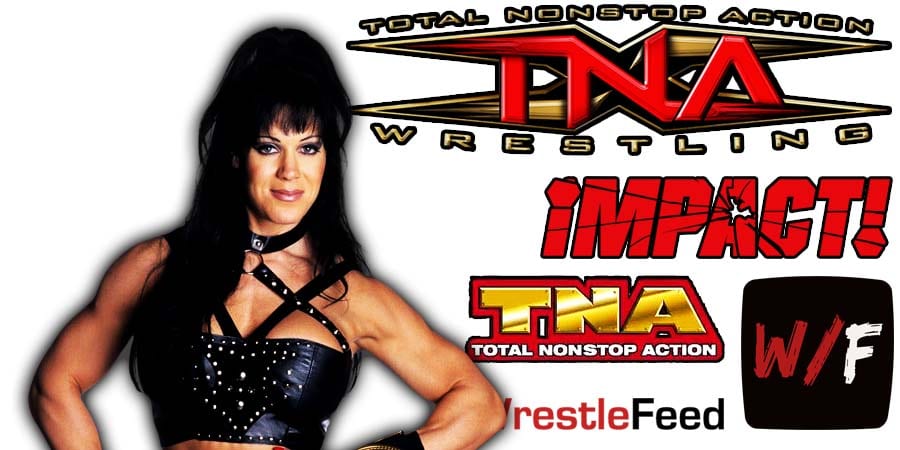 As she only worked as a valet, Karen did not actually wrestle, that is except for one match which took place at the TNA Sacrifice 2011 pay-per-view, that featured an intergender match of her and her husband Jeff Jarrett wrestling the team of her ex-husband Kurt Angle and former WWF Superstar Chyna in a losing effort.

Here’s what Karen had to say about the match and her female opponent Chyna, while being interviewed on an episode of ‘Insight with Chris Van Vliet’:

“People found out that I was going to have to do it. There was a lot of sh*t talked about how horrible it was going to be…

I thought it turned out well. But, I think I was most proud of that because when I walked in the back, you do this for wrestlers, but I never had it happen for me, people were clapping. AJ Styles came up to me like, ‘You did so good’.

Chyna was really nervous when she showed up that day.

I remember her being in her trailer all day and Terry Taylor was working for the company then and kept checking on her. She was one of the sweetest people that I think I have met in the business.

It’s sad, it’s very sad, but I have a great memory that I got to work with her.”

It was pre-taped at the Worcester Centrum in Worcester, Massachusetts and featured matches, interviews & storyline segments on the road to the ‘WWF Unforgiven 1999’ PPV.

– The Dudley Boys vs. The Blue Meanie & Stevie Richards (bWo)