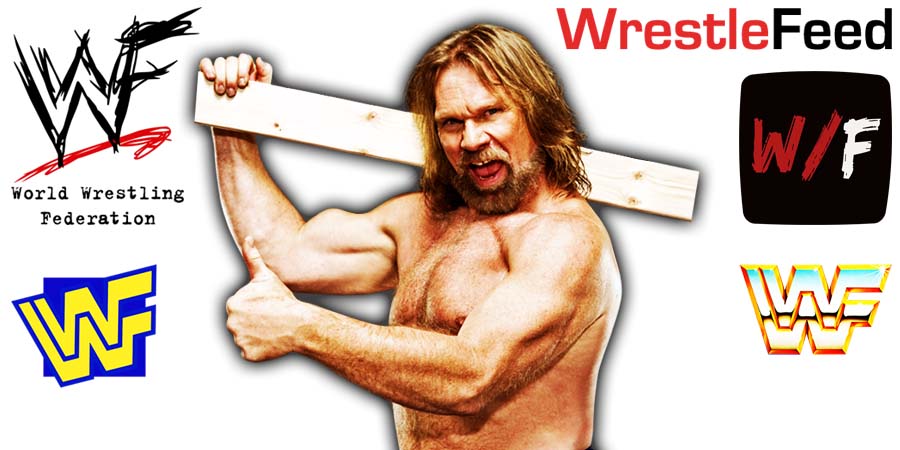 Old School WWF Legend ‘Hacksaw’ Jim Duggan was recently interviewed by WrestlingInc, where he revealed that he defeated cancer for the 2nd time in his life.

“Yeah, I had my prostate taken out last October and I thought hopefully that had taken care of everything. But I had another PSA test, found out that the cancer was still in me. I was very disappointed, to say the least. I was really down for a little while. But I had to go back in and get radiation.

I did 8 weeks of radiation treatment, but came out, rang the bell, I’m cancer free, thank the Lord. I tell folks, early detection saves lives. Make sure you get your physical. Know your PSA level, because one in six men, one in six will have prostate cancer. So get it checked out and they can save your life.”

When asked about having ‘one more match’ in him, Jim replied the following:

“No, I’m lucky I don’t pull a hamstring getting off the couch nowadays. Are you kidding, brother? But I joke, I say Flair and Hogan still call me kid, so it’s all relative.

You might not call it wrestling. But to show the young kids, it’s more than just taking bumps, you got to tell a story. You got to have a ring presence, and guys just go out there and do the mechanics. There’s more to the show than that.”

“Well, I knew Vince really loved the business, and who knows what goes on at that level, that’s far removed from me. But it would have to take something like that to get Vince out of office. That guy, he’s like Flair, he is the business. He loves the business. The ring is his whole deal. And I think it’d be hard for him to leave it if it wasn’t forced out. I think he’d be there to the very end.

So first I beat up the old man, then I beat up the kids. But I tell you, Vince was one of the first guys at the building and one of the last guys to leave. I was doing the voiceovers for something at one o’clock in the afternoon, and I had the headset on, and all of a sudden on the headsets, ‘No, Jim, that’s not right’. I’m, holy smokes, he’s here listening to rehearsals! The guy was a workaholic. Now is he a puppet master? Yeah, of course. But I don’t hate Vince McMahon like a lot of other people hate Vince, they spit on the ground.

At 68 years old, I wrestle for 40 years, I do appearances, I’ll do this one up in Iowa, what will people talk about? The WWF.

That was the golden age, and I was lucky enough to be part of it. And that was Vince McMahon. Plus, Nick, it’s been a good business for me. So many folks hear the stories about Scott Hall or Jake … one of my best friend’s Jake ‘The Snake’ Roberts. But for me it’s the opposite side of the coin. I’ve been with my wife for 38 years. I never had to go to rehab for booze or drugs. I did a lot of both, I can’t say I didn’t, but I just never got hooked on nothing. I had no felony arrest. Couple misdemeanors, but it was back in the 80s. Hooooooooooo!

A lot of the guys, DiBiase, Rotundo. I saw Rotundo at the airport, it looks like the Bataan Death March. He was going through the airport. I’m like, ‘Mike, how you doing?’ He goes, ‘I’m doing great, Jim’. I’m like, ‘Hey, I’m going home. Thanks buddy’. It’s a tough life, and thank goodness I have two daughters and neither one of them wanted to become wrestlers, and they’re both successful in their own right, in their own businesses.

But I tell folks, to be a top grade WWE, AEW wrestler, if you look at it as a businessman, and the way you feed your family … I tell folks, there’s 1200 NFL football players, there’s 500 NBA basketball players, there’s maybe 150 guys on WWE and AEW. It’s a television show. It’s more competitive than sports and it’s just not kids from America, you got kids from Japan, Australia, Europe. It’s a very, very competitive business. And people don’t see it that way. They’re like, well, it’s all fake. Well, that has nothing to do with it being competitive.”

And of course the interviewer also asked about the infamous 1987 incident when he as a babyface was pulled over by the police, while riding with The Iron Sheik, who wrestled as a heel and was Jim’s current storyline rival at that time.

“The bust that will live in infamy! Yeah, it sure was. I was lucky enough to survive that. It would’ve killed most people’s careers, I think. And I never fully recovered from it. Here you are, what, 35 years ago when one of the first things folks ask about is the Duggan/Sheik.

And the worst thing about it, people think me and the Sheik are buddies. I gave him a ride that one day, and of course I had the weed, I had the misdemeanor pop for the weed, and I was drinking while driving, which was legal in Louisiana at the time where I lived, I just didn’t realize it was illegal in New Jersey.

And the Sheik had the three grams of coke. But we both got painted with the same brush, and I was over 21. I got to take responsibility for what I did. I was a fool. I made a huge mistake and I was lucky to recover from it professionally, that’s for sure.”

Most fans of mixed-martial-arts remember Sapp as a former fighter, who fought all around the world for the past 2 decades, but not that many people actually knew that he was also a professional wrestler.

In 2000, he was signed to a developmental contract by Ted Turner’s World Championship Wrestling, but only appeared on TV once for an interview during an episode of WCW Thunder.

When the World Wrestling Federation bought WCW in March 2001, Bob went on to become a professional MMA fighter.