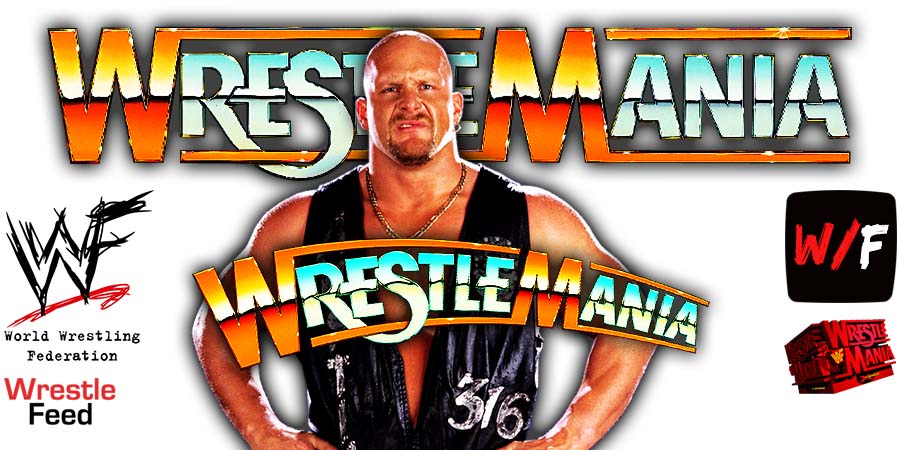 He will appear on The KO Show, where he will confront former Universal Champion Kevin Owens about disrespecting Texas and fellow Texas Legends.

Last month, the Wrestling Observer reported that Austin is in great physical shape and will most likely be in his in-ring gear tonight.

2-Time WWE Hall Of Famer Ric Flair reunited with Austin yesterday at a Fiterman Sports event, and Austin was looking visibly leaner than the last time we saw him on WWE TV.

Bret Hart will be in attendance tonight to support Austin. Bret confirmed it himself during an interview.

During an interview on the Rich Eisen Show, Austin talked about why he’s doing what he’s doing tonight.

On returning for WrestleMania 38:

“This opportunity comes up, Kevin Owens starts running me down and gets my attention.

It was a thing where, I kind of said, ‘I’m never going to get in the ring again.’ In this business, never say never.

I said I would never get in, but prompted by the right person at the right time, hell, I wish he would have pissed me off a little sooner than he did to give me more time to prep.

Once you step into the ring, it’s like stepping onto a football field, that’s where business happens. We don’t know what it’s going to escalate to. I’ve been working on my conditioning.

Had it been anywhere else other than Jerry’s Place…it’s a two-night event, WrestleMania is biggest show of the year, to be part of that is really special to me.

I’m doing this for me. I’m going out there to have a damn blast. I’m gonna have fun and I’m gonna wear these two fists out on Kevin Owens. I’m sure he’s going to get some too because he’s had an amazing career. I’m glad he pissed me off when he did.”

On why he’s returning:

This comeback means a lot to me as I’ve been getting back into in-ring shape. I’m gonna go out there and do the absolute best I can.”

Final words on his comeback:

The main event saw NWA World Heavyweight Champion Ricky “The Dragon” Steamboat defending his title against “The Nature Boy” Ric Flair in a ‘Two out of three falls match’.