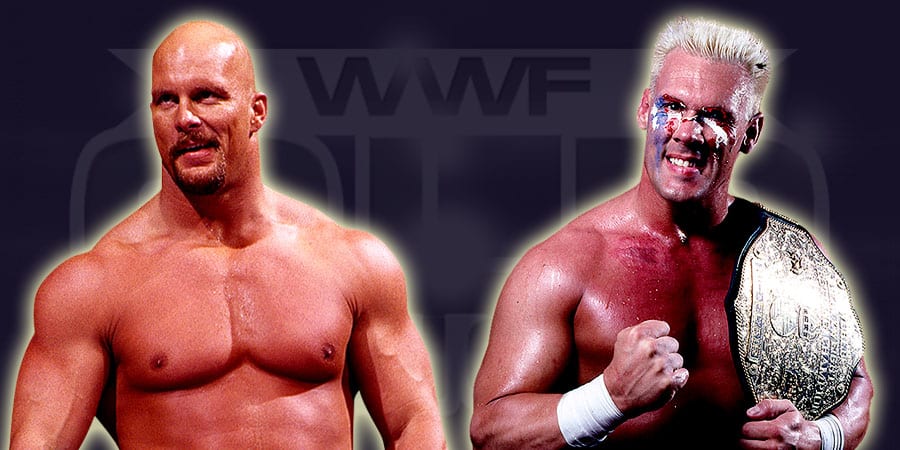 During a recent interview with WWE.com, WWE Hall of Famer “Stone Cold” Steve Austin talked about landing on the cover of 2K16, possible match with Sting and more.

Who would he want to face on the current WWE roster?
“Man, John Cena. I got a lot of respect for that guy. You talk about a road warrior, a guy that works his tail off, shows up with a smile on his face every single day and adds himself to shows when he’s needed. Hell, even when he’s not needed, the guy just loves to get on the road, and he loves the company that much. He’s an absolute workhorse. I’ve seen John Cena have great matches with so many great talents, but I don’t think there’s anybody that could light his a** up to a level of intensity more than myself as “Stone Cold” Steve Austin. So I’d love to tangle with John Cena, and I tell you, that guy’s an absolute machine in the ring. He never gets tired. He’s a gym freak. He’s one of the strongest guys in the business. I really like what he does inside the ring, and I would really like to mess with him to see what kind of magic we could create.”

On landing the cover of WWE 2K16:
“It caught me completely off guard. I was very surprised when I got the phone call. You know, I figured I’d been gone for such a long time; it’s been a while. I think it really speaks to how Austin and The Attitude Era resonated with the fans back then and, obviously, it resonated enough for 2K to pick a guy like me. I’m thankful to have had so many dance partners and so many Hall of Famers to work with. It was really an all-star cast of people in a 20-by-20 squared circle, entertaining people. At the end of the day, you really gotta thank the fans for being there for us. It’s an extreme honor.”

On a possible match against Sting:
“Man, the Baltimore Arena… I was talking about this just the other day on my podcast. Man, that was a rough building. A fun building to work that just hadn’t been upgraded in such a long time. I think Baltimore was really, in Sting’s WCW days, a stronghold for him. Chicago was that stronghold for me. And don’t get me wrong: Sting was over wherever he went. I think the guy is WWE Hall of Fame material. But I do believe that that was one of his strongholds way back in the day. So, that man, I tell you what, that ain’t a bad matchup and he’s another guy that I worked with many times down in WCW. When he was on top, I was kind of a mid-card guy and we had great matches. It would be great to play “Stone Cold” vs. Sting in any arena you can pick, and if you’re going to pick the Baltimore Arena, I’m down with that.”

Superstar from the past and new Superstar he would like to face:
“A guy that I’ve always had so much respect for and only got a chance to meet one time was Andre the Giant. So, I would like to play Andre the Giant as myself, “Stone Cold” Steve Austin. And some of the new guys that they’re bringing into this game like Finn Bálor, who I think is an outstanding talent and a veteran who’s moved to WWE, but a guy who is probably one of the best wrestlers in the world. There are many dream matchups that I could sit and talk to you about all day.”