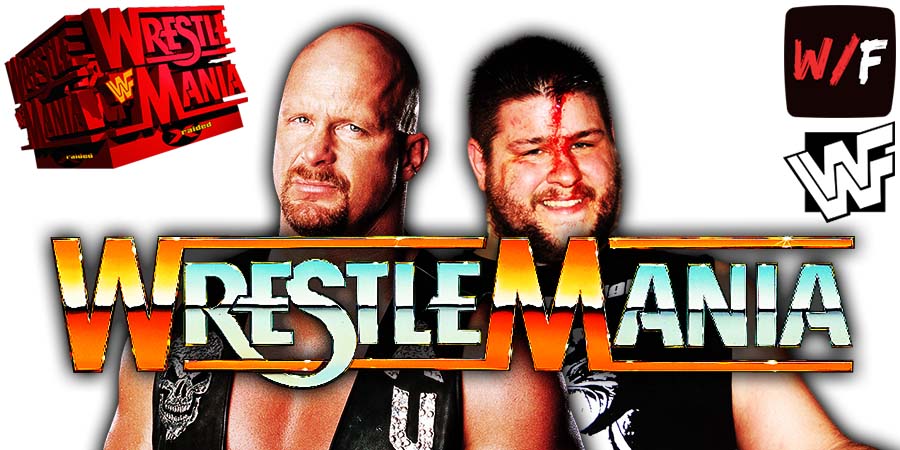 This was Austin’s 1st match in 19 years.

After the show ended, Austin was interviewed backstage and said the following about retiring in Dallas:

“I came here looking for anything. This is where I started. I was lucky enough to finish here.

KO is outstanding, and he ran his mouth a little too much, and it caught up with him.

But it was really an honor to be here on such a stacked card with so many great matches.

You love the crowd, and the guys and girls before me had so many great matches. It’s really hard to follow that, but you live and die by that crowd, and this crowd is so faithful. So rambunctious, they are behind everything you do.

So, I give a shout-out to the WWE Superstars that worked before me and the ones working tomorrow night. But I give the biggest shout-out to the crowd because I never expected to be able to headline a WrestleMania at this day and time.

It’s all about the WWE Universe. Thank you, and you take care, because that’s the bottom line because we said so.”

Lance Storm & Chris Jericho were known as The Thrillseekers in Jim Cornette’s Smoky Mountain Wrestling during the mid-90s, before Storm went to Europe & Japan and eventually ended up in Paul Heyman’s Extreme Championship Wrestling, where he had a successful run from 1997 till he left for Ted Turner’s World Championship Wrestling in 2000.

He went on to become the leader of Team Canada in WCW and later joined the World Wrestling Federation as part of the infamous WCW/ECW Invasion storyline.