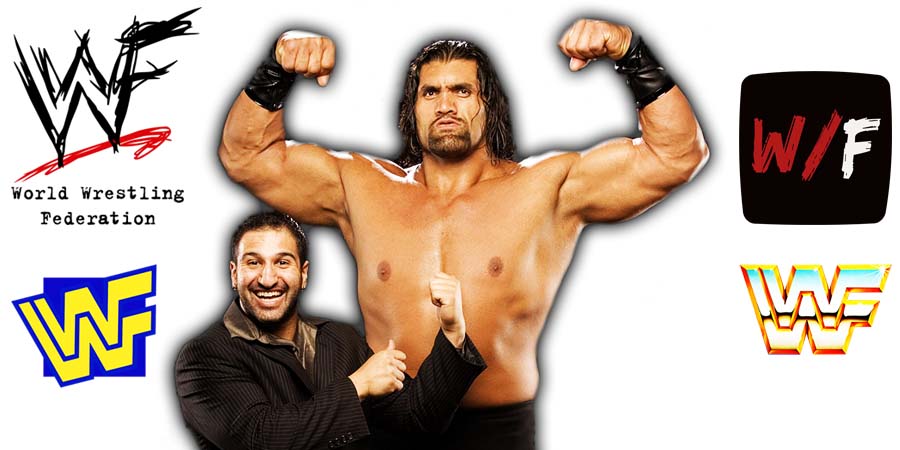 • Surprising Original Plan For The Punjabi Prison Match In WWE

During an interview on The Insiders podcast, former WWE writer Court Bauer revealed that the Punjabi Prison Match was originally supposed to be an Exploding Death Match, but somehow got turned into that bamboo cage structure.

Below is what Bauer said:

“I wanted to do a death match, an exploding death match in WWE. They were trying different things at this time. There’s a time when [it was like] ‘let’s try and rewatch ECW, let’s try different stuff.’ So I showed Vince an Onita death match. And he said ‘yeah let’s do it.'”

And from there, they said, ‘Okay, get with Kevin Dunn and his team and let’s get to work on it.’ I wasn’t the lead writer. I would just suggest to one of the writers in the room. It’s a win for me, Vince liked an idea. Now it’s on someone else’s plate.

So we’ll circle back and that’s the lead writer’s job to kind of communicate with KD and his team on whatever that project is. So Alex Greenfield is the head writer of Smackdown at the time. He tries to keep in contact with KD’s team, he’s not getting the clear answers.

It seems very vague. And he’s like, ‘Hey, we get pictures from our mockups. What do you need from our end? Do you need anything? Here’s the video.’ And just it’s very quiet. And then about 12, 14 days out we finally see the first photos of this thing being built. It’s like oh that’s not an exploding death match.

It was supposed to be Undertaker in one of these things, I think. And it turns out, it’s what you would see is this thing out of Indiana Jones, the Temple of Doom or something. It’s an action place that comes to life. And I guess in some ways for WWE it is impressive what the structure did end up being. From a match point of view is very brutal, because there was no give on that bamboo.

And then going through the wellness process and all these people failed some tests with elevated enzymes, liver issues. And what was once a match with Taker versus I think [The Great] Khali ended up with Big Show, who poor guy just didn’t have any prep time to lay this out.

He wasn’t given a match where you could do much in it. And this match did not feel good in that kind of setting. So it was one of those things where it was a spectacle and maybe it’s like, you know, Chamber of Horrors style thing. And I remember Dusty (Rhodes) just watching this and shaking his hand and saying, ‘oh baby, long night.’ And yeah, it was a rough night.

I feel for all the parties involved but that was originally supposed to be an exploding death match and you know [they] changed it. I don’t know if Kevin just felt that wasn’t feasible. We never got an answer why they took the creative from exploding death match to Indiana Jones and Temple of Doom playset but it happened and you know, I think [Greenfield] still to this day is baffled by what happened there.

But I can also see doing that indoors, doing a death match with those kinds of pyro qualities could be problematic, but we never got an answer. I would assume it had something to do with that, but I don’t know.”

Only 3 Punjabi Prison Matches have taken place in WWE:

This episode was pre-taped at the Continental Airlines Arena in East Rutherford, New Jersey and featured matches, interviews & storyline segments on the road to the ‘WWE Survivor Series 2003’ PPV.