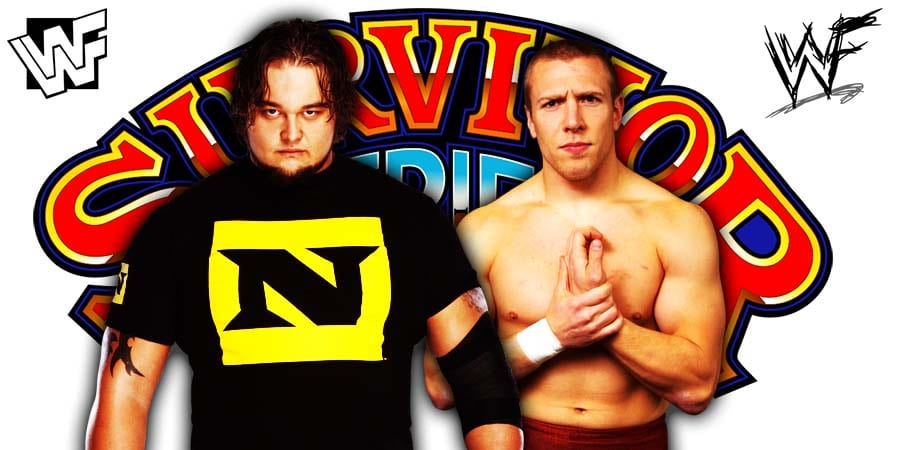 Up next is the NXT Championship match. Pete Dunne makes his way out first, followed by NXT Champion Adam Cole.

Cole’s ribs are taped up as he took a major bump last night at NXT TakeOver: WarGames 2019.

After good back & forth action, Cole defeats Dunne clean to win the match.

.@AdamColePro with a devastating Panama Sunrise!

Up next is the Universal Championship match. Daniel Bryan makes his way out first, followed by “The Fiend” Bray Wyatt!

The match begins and Bryan immediately starts delivering corner drop kicks, but Fiend takes him down with a vicious clothesline!

Fiend takes down Bryan with a headbutt. This is The Fiend’s 3rd televised match in WWE. All of those three matches have taken place on PPVs.

Fiend sends Bryan into the steel ring post on the outside and then drops his body on him.

Fiend launches Bryan with a big suplex! Fiend delivers an upper cut outside the ring.

The Fiend comes running at Bryan, but misses and collides with the steel ring steps.

Bryan goes for a suicide dive, but Fiend catches him, but Bryan counters and sends him face-first into the ring post.

Bryan then takes down The Fiend with a running knee off the ring apron and then a splash from the top rope on the outside!

Bryan hits a top rope dropkick twice to put down The Fiend. Bryan goes for a third one and takes him down again.

Bryan is fired up and the crowd begins chanting YES. Bryan hits The Fiend with the YES kicks, but no effect on The Fiend.

Bryan now kicks The Fiend in the head multiple times.

Bryan hits the running knee and goes for the cover, but The Fiend kicks out!

The Fiend gets up and puts the Mandible Claw on Bryan on the top rope, but Bryan turns it into an Armbar to get out of it.

Bryan goes for the Running Knee again, but The Fiend catches him mid-air with the Mandible Claw and The Fiend pins Bryan to win the match!

Bryan might have lost, but the YES movement is definitely back.