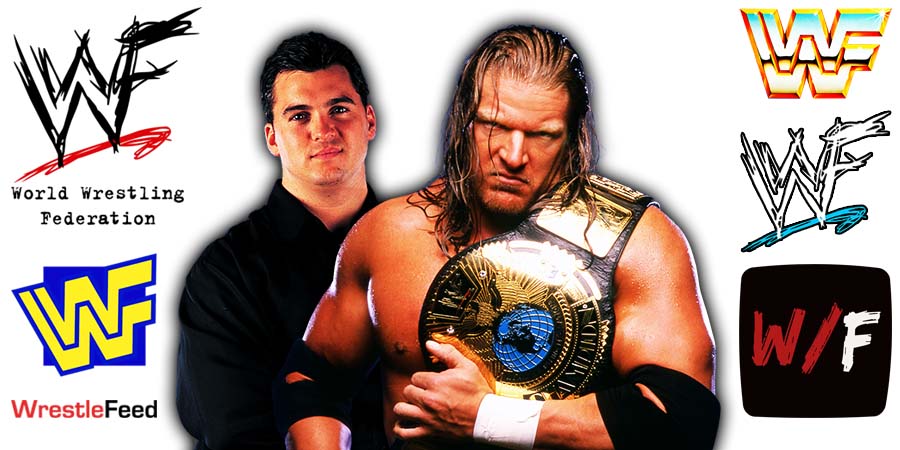 During a recent edition of Monday Mailbag on AdFreeShows, Old School WWF Referee Mike Chioda was asked if anybody advised Triple H to not date Stephanie McMahon back in the day.

Chioda said Shane McMahon did that, which led to Triple H having heat with him for 10 years.

“Yes, Shane McMahon did. That’s why the feud fell out, that’s for sure. It was a thing from Vince Sr. that came around many years ago. They didn’t want anybody dating talent, none of the kids and none of their family. He didn’t want them taking bumps, which that didn’t happen.

Shane is still not on top of the list. Where is he at now? Is he in the office? Is he running things? Is he Vice President? Is he Vice CEO? Can somebody tell me where he’s at right now because he should be there.

I mean, even with Triple H out, you’re going to have Johnny Laurinaitis, Road Dogg, and Scott Armstrong running the f**king business? You’re not going to have Shane McMahon there? Where’s he at?

It’s boggles me for many years too. A lot of heat there. It gets more interesting, believe me. It’s sad because when I started working for this company, there was Linda McMahon, Vince McMahon, Shane McMahon and Stephanie McMahon and now it seems to be all broken apart. All the money in the world probably can’t fix it.

They have all the money in the world, a publicly traded company, which is ok. The family is torn apart at this point I think. Maybe not torn apart all the way, which I hope not, but it’s torn apart.”

Kendall is the son of late WWE Hall of Famer Blackjack Mulligan and the brother of Old School WWF/NWA/WCW Legend Barry Windham.

A lot of you, who watched WCW during the Monday Night Wars of the late 90s, will remember him as a member of Curt Hennig’s famous faction, The West Texas Rednecks.