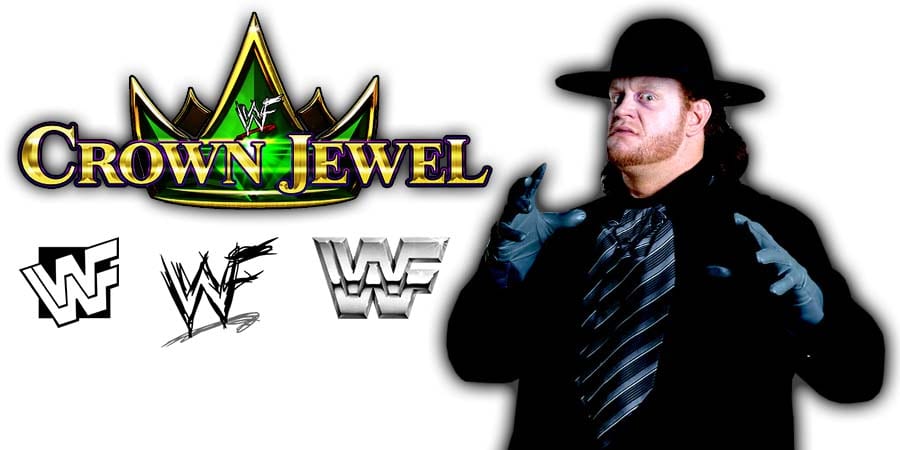 On this day in 2018, we lost Old School NWA/WWF/WCW Legend “Dirty” Dick Slater (Real name: Richard Van Slater) at the age of 67.

• The Undertaker Pulled From WWE Crown Jewel 2019, Another Change Made

Bad news for Undertaker fans – The Deadman won’t be in action on October 31st at WWE Crown Jewel PPV in Saudi Arabia.

According to the Wrestling Observer, WWE doesn’t want to use The Undertaker for this upcoming event as they were able to secure Tyson Fury, who’s a big star in Boxing. Also, the event will feature Cain Velasquez’s first WWE match, which will be a highly-anticipated rematch against Brock Lesnar for the WWE Championship.

WWE feels they have enough star power at Crown Jewel 2019 and can save The Undertaker for future events.

While The Undertaker won’t have a match at WWE Crown Jewel 2019, he’s currently in Saudi Arabia for the Riyadh Season (tap here to know more).

Another change has been made to WWE Crown Jewel 2019 and it’s that Universal Champion Seth Rollins won’t be pulling double duty anymore.

Rollins has been pulled from the Team Hogan vs. Team Flair match and his replacement will be announced soon.

UPDATE: Roman Reigns is the new captain of Team Hogan.

Below is the exchange Rollins & Hogan had regarding this:

Understand the champ @WWERollins needs to do what he’s gotta do. Defending the title against @WWEBrayWyatt is what champions do. Don’t worry Naitch, I got an idea for Team Hogan brother. #WWECrownJewel HH

I’d fight everyone if they’d let me. Thanks for understanding, brother! I owe ya one! https://t.co/Yn3mP2DqKZ

Below is the current match-card for WWE Crown Jewel 2019: