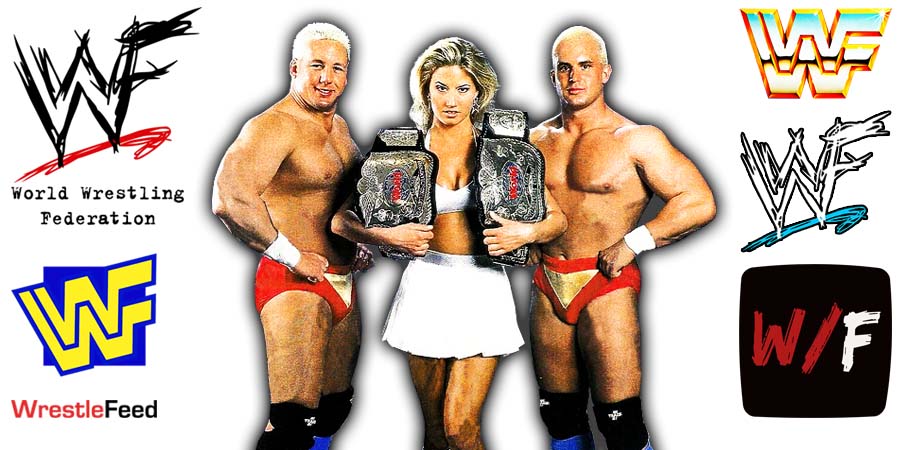 During a recent appearance on the ‘It’s My Wrestling’ podcast, former WWF Tag Team Champion Dr. Tom Prichard (aka Body Donna Zip) revealed that the various reasons behind WWE not being able to create new larger than life Superstars, that will become draws as main eventers, are a lot more complicated than fans assume these days.

Here’s what the former Heavenly Bodies member had to say:

“When Vince came out and went on public TV, national TV, worldwide global TV and told everybody we’re not going to insult your intelligence – we’re sports entertainment, we’re not really doing what you think we’re doing. Well, if you remember, that was right before the Attitude Era and things exploded so people even though they knew, they still wanted to see The Rock, Stone Cold, Mankind, The Undertaker, Kane, all those guys.

Where are your Rocks, Shawn Michaels, Undertakers, Kanes and all of those guys today?

I mean we got [Johnny] Gargano, Adam Cole. We’ve got some of the guys they want to talk about in NXT. I’m not a big guy either, but they don’t look like that ‘mega star’ power to me. The Undertaker is a star, The Rock is a star, Austin is a star, Shawn [Michaels] is a start, Hunter is a star. I don’t want to, but as much as some people want to knock everybody who’s responsible, they got to look in the mirror. I’m talking about the talent now, they’ve got to look in the mirror.

Austin took it upon himself to change his gimmick, shave his head come up with ‘Stone Cold.’ It was Austin, it wasn’t the office. Rock was the one who came back saying, ‘why are they booing me? I’m a babyface I’m doing what you guys are telling me.’ Like, wait a minute, no, do what you feel, do what is in your heart, do what is authentic to you.

I love Drew McIntyre, I do. He looks tremendous. A lot of guys they’re doing great, I love Sheamus he’s tremendous. Roman Reigns, oh my god. So what’s missing? Is it scripts? Are we giving the guys scripts for promos? I really don’t know. I read just like everybody else does [on news sites] that ‘somebody gave you a script or things change four times that day, five times, changes are still going on the air’.

So, until everybody who wants to be an armchair booker is sitting behind that switcher in the production truck or is sitting in gorilla calling the spots, you don’t understand that they had six minutes going out to the ring and got cut down to a minute-and-a-half, and those guys are scrambling and they don’t have 15-20 years under their belt. They have 4 (years) in NXT, and they’ve got to learn how to do that on the fly.

That’s why, going back to developmental and we used to do that on a few occasions, we’d give you time to work with and then tell the referee ‘oh we had 6, now we have a minute and a half.’ Adjust and adapt, there you are. You’re thrown into the water, but you’re in a pool surrounded by lifeguards.

If you’re on RAW or SmackDown, it’s your partner that’s your lifeguard, and sometimes they don’t know themselves. The referee can tell you what to do, but he can’t have the match for you. So, there’s a lot of elements people don’t see, a lot of issues people aren’t aware of.”