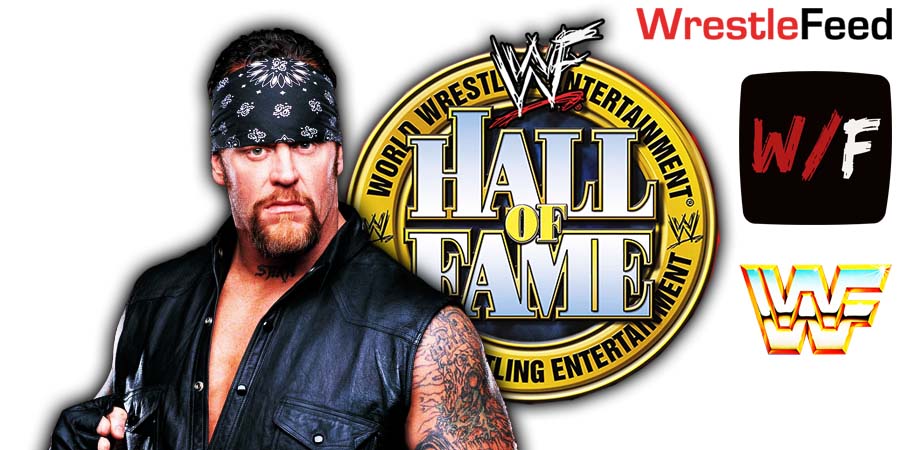 The Undertaker will headline the WWE Hall Of Fame Class Of 2022 on April 1st in his home state of Texas.

2-Time WWE Hall Of Famer Ric Flair, who faced The Undertaker at WrestleMania 18, tweeted the following about it:

“Congratulations @undertaker! This Is As Big As The Day That Stone Cold Went In! Thanks For All That You’ve Done For The Business & For Me Personally! WrestleMania 38 Gets Bigger Every Day! WOOOOO!”

Congratulations @undertaker! This Is As Big As The Day That Stone Cold @steveaustinBSR Went In! Thanks For All That You’ve Done For The Business & For Me Personally! WrestleMania 38 Gets Bigger Every Day! WOOOOO! pic.twitter.com/ORuvqZUXBc

Below is what the WWE Stars & Legends tweeted about this huge news:

Kane: Congratulations to @undertaker on his induction into the #wwehof! No one, and I mean NO ONE, deserves it more. The Undertaker is truly iconic and transcends @WWE. The man behind the character is just as impressive! I am absolutely thrilled! CONGRATULATIONS!!

Triple H: Absolutely no one has had as big an effect over as long of a career as @Undertaker. He is the measuring stick of this industry, in and out of the ring, and now takes his well-deserved place in the #WWEHOF!

Shawn Michaels: I’ve had the pleasure (and often times pain) of being in the ring with @Undertaker throughout both of our careers. I count him among the absolute best and someone I consider a close friend. Congratulations and welcome to the #WWEHOF club!!!

AJ Styles: No one like him. He is truly a PHENOM in every sense of the word. A Hall of Fame career earned over 30 years of hard work and dedication in @WWE. Congratulations, Taker. #WWEHOF

Jeff Jarrett: There will NEVER be anyone who had a run like Taker – both in and out of the ring. 30+ years on top, multiple eras, led by example, and made everyone around him better!

The true MOST VALUABLE PLAYER of all time!

Drew McIntyre: There isn’t a Hall of Fame without this man #WWEHOF @Undertaker

Bobby Lashley: Nobody better! Respect as always to The Phenom 👊🏾

The Hurricane: STAND BACK!! One of the most iconic and legendary careers ever. My admiration and respect for this man can not be put into words. #ThankYouTaker

Damian Priest: YES!!! Congratulations @undertaker. Deserving is an understatement. He is a symbol of everything great about our business. Growing up he was always my hero. Thank you for inspiring me. To me, you are the greatest! 🐐 #LiveForever

– Sgt. Slaughter vs. The Iron Sheik

– The Masked Superstar vs. Rocca Verona