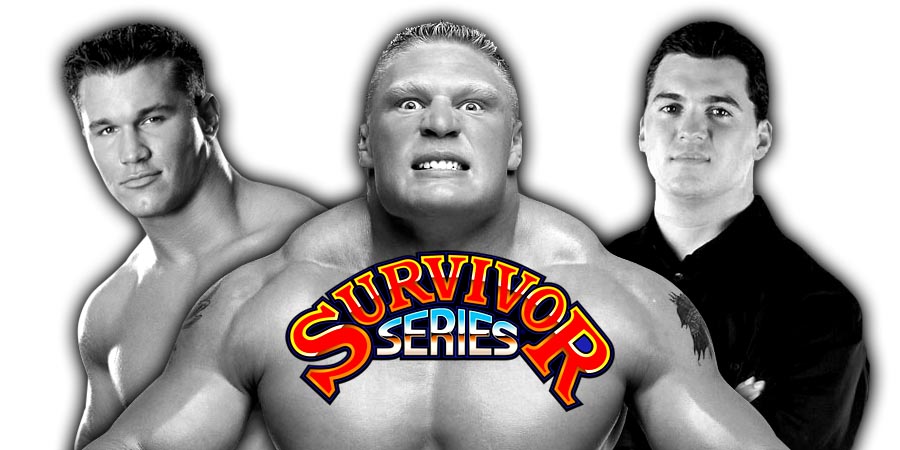 Below are some interesting things to note from Survivor Series 2017:

• Kevin Owens worked his first ever Kickoff Show match in his WWE career at this PPV.

• Brock Lesnar wrestled his longest singles match since Hell in a Cell 2015 PPV.

• Despite being a 13 Time WWE World Heavyweight Champion and among the most accomplished men in the main event of the show, Randy Orton was the youngest member of Team SmackDown (along with Nakamura).

– Was Top NXT Star Scheduled To Get Called-Up To The WWE Main Roster?

During a recent edition of Wrestling Observer Live, Dave Meltzer commented on Drew McIntyre losing the NXT Championship at NXT TakeOver: War Games, getting injured & possibly being called-up to the WWE main roster. Below is what he said:

“It’s funny because I don’t know that he was being called up. As soon as I saw him get pinned, the first thing in my mind was he’s getting called up because I didn’t expect him to lose. I expected him to do a program with Adam Cole.

I don’t think that they’ll go with Adam Cole. I guess they could. I mean if Drew McIntyre is hurt and he was gonna get called up, that really sucks for him because he was on a roll. And I thought that, you know, just watching like the TV on Wednesday and then watching the match and in just the reports and seeing them live a couple months ago, I mean he could be one of the better guys on the main roster. He can talk. He’s got the size that they like. Good body. Very good worker. Really good look.

So I mean either way he’s gonna be on the main roster soon enough. But hopefully no surgery because bicep surgery could be a bad deal. Bicep surgery is usually a six-month deal.”

– Tamina Compares Her Staredown With Nia Jax To That Of Hulk Hogan – Andre the Giant, Stone Cold – The Rock & The Undertaker – Shawn Michaels

As seen at Survivor Series 2017, Tamina Snuka and Nia Jax went at it during the Women’s 5 on 5 Raw vs. SmackDown Survivor Series elimination match. Below is what Tamina tweeted:

You See @NiaJaxWWE … Certain moments in wrestling history
are so iconic that a photo sometimes does them an injustice in capturing the energy surrounding them, but these photos certainly prove otherwise.#SurvivorSeriesMoment #UntilNextTime pic.twitter.com/TIG77sei0q