During a recent appearance on “Talk Is Jericho” podcast, WWE Hall of Famer and current Raw General Manager Kurt Angle recalled his shoot fight with Brock Lesnar back in the day.

Below is what Angle had to say:

Brock, as good of a wrestler he was, he wasn’t that good of a wrestler. He was a big, athletic kid that knew one move, a double-leg. And that’s not a discredit to him, it’s just a fact that we wasn’t real technical as a wrestler. So I knew a lot of technique, and always knew how to wrestle big guys, especially guys like Brock, so it wasn’t an issue to me. 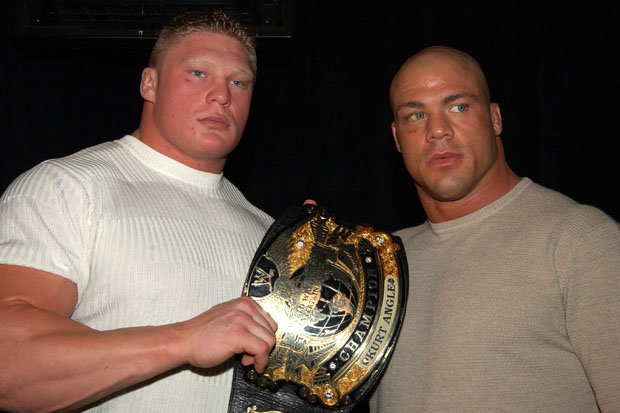 I didn’t kick his butt. It was a very close wrestling match. And the reason I won is because, and I know Brock doesn’t want to hear this, but Brock is a beast. I mean, anything he touches, he can turn to gold. He’s not just a beast. He’s a great athlete. He’s smart. If he would’ve stayed in the NFL, just another half a year, he would have been a 10-time all-pro.

He was UFC Heavyweight Champion when he just tried that. When he comes to WWE, he’s WWE Champion when he tries that. He was NCAA Heavyweight Champion in wrestling. It’s like he wins everything. If Brock would’ve learned, if he would’ve went beyond NCAAs and learned at the Olympic level, there’s no way in hell I would have beat Brock. He is that good of an athlete, but he just didn’t know wrestling like I did.”