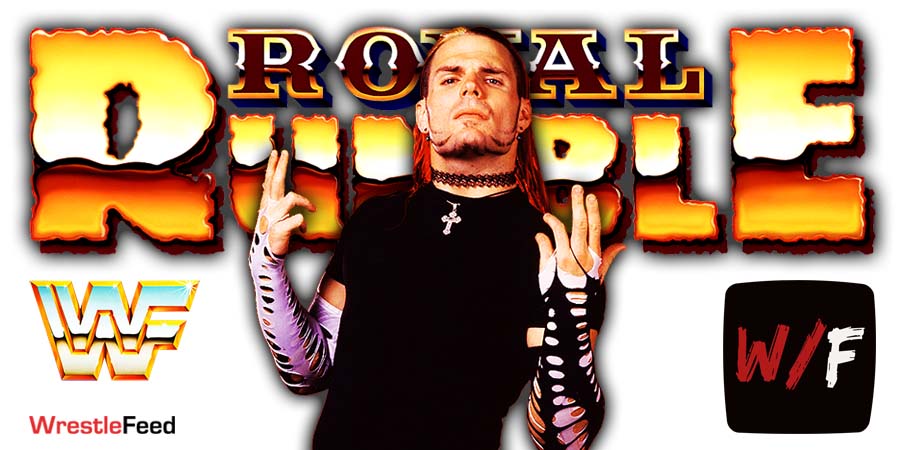 During a recent interview on Wrestling Inside the Ropes with James Stewart a few months ago, former WWE Champion Jeff Hardy revealed that he wants to accomplish 2 things in WWE before retiring: wrestle Roman Reigns and capture the Universal Championship.

“My number one goal is definitely to be the Universal Champion one time before my career is over because I don’t put a number on how much longer I have. I’m very much living life day to day. I just want to entertain people.

It’s so exciting to be back in front of the live audiences after almost a year of the silence, and the ThunderDome, and the sound effects. It was a wild time to be a pro wrestler in WWE.

I got all these ideas still, and I’m so blessed that I still have the passion in here and up here for pro-wrestling that I had when I was 16 years old. Anything’s possible in pro-wrestling, and that’s why it’s so cool. So, I’m shooting for the stars.

It’s just so powerful every time I watch SmackDown, and I love The Usos and the the whole ‘Head of the Table’ thing. The ‘Tribal Chief’ is so strong. That’s definitely a dream match I have before my career is over because I’ve never been in the ring and went head to head with Roman Reigns ever.

That’s on my bucket list, for sure, and I think it could be a very beautiful encounter.”

It looks like Jeff was on his way to accomplish one of his above stated goals – facing “The Tribal Chief” Roman Reigns.

According Steve Carrier, a WWE source is reporting that Roman Reigns was ready to face Hardy at either Royal Rumble 2022 or WWE Super ShowDown 2022 (Saudi Arabia PPV before WrestleMania 38):

“Jeff was not an issue. In fact, there was talk amongst the writers that Roman and Heyman were on board with working a match with Jeff at either the Rumble or Saudi.”

Sadly, Jeff won’t be able to accomplish these goals, as the 44-year-old Legend has been released from WWE because he refused to go to rehab after his recent incident at a Live Event.

This was most likely his final run in the WWE.

It was broadcasted from the Arrowhead Pond in Anaheim, California and featured matches, interviews & segments, on the road to the ‘WWF Royal Rumble 2002’ PPV.

1. The Undertaker vs. Spike Dudley

4. The Dudley Boyz vs. The Rock & Trish Stratus

6. The Big Show vs. Lance Storm