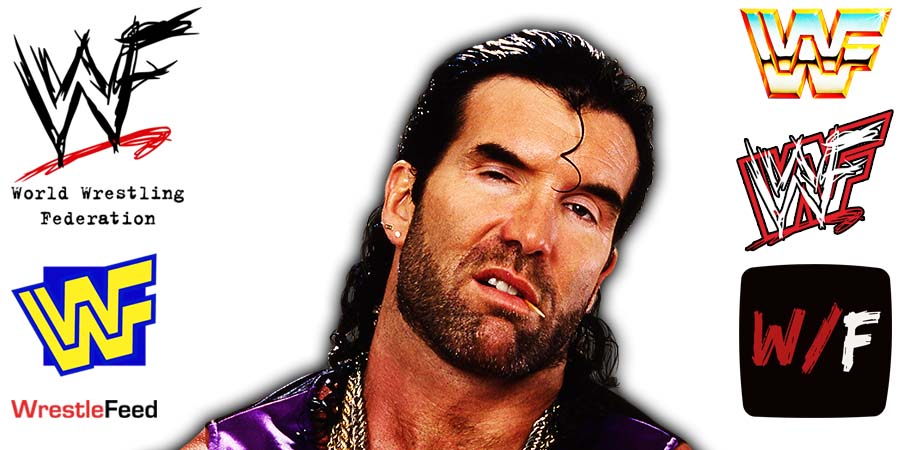 We are saddened to announce that Old School WWF/WCW Legend “Razor Ramon” Scott Hall has passed away at the age of 63.

WWE kicked off tonight’s RAW with this sad announcement.

WWE is saddened to learn that two-time WWE Hall of Famer Scott Hall has passed away.

Below is how the wrestling world reacted to Hall’s death:

Shawn Michaels: I love you my friend!!

Triple H: I’m gutted…Lost a brother I love you Scott!! I’ll see you down the road… #BuddySystem

I love you Scott!!
I’ll see you down the road…#BuddySystem pic.twitter.com/Qx2he0TetS

Ric Flair: Scott, You Had An Incredible Career! As You Know, We All Respected You So Much! Thank You For Our Friendship & For The Greatest Survivor Series I Was Ever In! Rest In Peace! 🙏🏻🙏🏻🙏🏻

Scott, You Had An Incredible Career! As You Know, We All Respected You So Much! Thank You For Our Friendship & For The Greatest Survivor Series I Was Ever In! Rest In Peace! 🙏🏻🙏🏻🙏🏻 pic.twitter.com/25dwdtgObJ

Sting: Heart breaking, HUGE loss. He definitely made us all better – helped me with that one-of-a-kind Scott Hall insight. So many “Too Sweet” memories. Scott – you will be missed.

Chris Jericho: ScottHall and I didn’t always see eye to eye when we worked together, but I’m happy to say we cleared the air and became friends over the last few years. He even joined us on the Chris Jericho Cruise in 2020 and we had a great conversation for Talk Is Jericho!

It’s a drag we didn’t have more time together, because Scott Hall was a pretty cool cat with a WICKED sense of humour. The dude was seriously razor sharp hilarious. I have many memories of him going back to watching him with my Dad in AWA in the mid 80’s…

What an amazing worker he was in the ring and out! He was one of the biggest stars I’ve encountered during my career and he was by far the BEST pro wrestler I’ve ever seen to NEVER hold a World Title! Love and respect forever. God bless you #BadGuy…I’ll never forget you.

Mick Foley: Scott Hall was a towering figure among his contemporaries – a legend inside and outside the ring. My deepest condolences to his friends, family and everyone who loved him.

JBL: Always enjoyed being around The Bad Guy. One of best minds, and workers, in the business, he and Kevin changed the business – for the better. Rest easy friend.

Nikki Bella: Doesn’t seem real. RIP Scott. You were a light. I’ll cherish our memories and always be so beyond grateful for your words and encouragement. Has always meant so much to Brie and I. Lots of love and prayers to the family.

Natalya: So many prayers for Scott Hall and his family right now. The wrestling community is a very strong family and near or far, we have each others backs. Times like these are never easy but I do know there are so many incredible people waiting for you on the other side, ‘Bad Guy.’

Paige: The world loves you Scott Hall, hero to many including myself ❤️

Not only the most influential group in wrestling but also my best friends pic.twitter.com/xdrSTIo2wc

AEW joins the wrestling world in mourning the passing of a true legend Scott Hall. Our thoughts are with his family, his friends and his fans. pic.twitter.com/orkCBmKcjU

DDP: My brother has gone on to Valhalla to raise some hell. The bad guy till the end.

“YO Death, what’s your finisher? Can’t wait to kick out”

He may not have kicked out, but he wasn’t gonna put that MF’er over clean ❤️ @realkevinnash love you & miss you more!

Sgt. Slaughter: Sad to hear the passing of Scott Hall. I remember when Curt Hennig asked if I could get Scott booked in WWE. After an introduction to @VinceMcMahon “Razor” was created & the rest is History. “Hey Yo” I Guess God Needed a Good, “Bad Guy” R.I.P. My Friend 🙏🏻

Alexa Bliss: This hurts my heart so much 💔

Ted DiBiase: My heart and prayers go out to the family of Scott Hall. He was a great wrestler, a likable guy, and will be missed. As some of you may remember, I had the pleasure of wrestling my last singles match in WWE against Razor Ramon.

My heart and prayers go out to the family of Scott Hall. He was a great wrestler, a likable guy, and will be missed.

As some of you may remember, I had the pleasure of wrestling my last singles match in WWE against Razor Ramon. pic.twitter.com/Xn0iyXsP0v

And I still do. Thank you for everything. #ScottHall pic.twitter.com/qjh47Xy8GH

The Godfather: Met Scott in 88 in Germany working for Big Otto Wanz. Rest with peace my friend. Prayers going out to the family.👏🏽👏

It was pre-taped at the Wheeling Civic Center in Wheeling, West Virginia and featured matches, interviews & storyline segments on the road to the ‘WWF WrestleMania XIV’ PPV.