McMahon’s lawsuit stated that Oliver went against orders when it came to hiring people. It’s also alleged that he stopped performing his duties during the Coronavirus pandemic.

McMahon wanted quality players for the league, but Oliver hired Antonio Callaway for the Tampa Bay Vipers, who has been involved in a number of issues in the past including a credit card fraud. Oliver allegedly deceived McMahon while hiring Callaway.

A major issue between the two was Oliver trying to sign Heisman Trophy winner Johnny Manziel, who McMahon did not want in the XFL.

McMahon sent the following message to Oliver about it including his WWE catchphrase, according to the lawsuit exhibit:

“How long R U going to play this game Oliver? U know there is NO CHANCE IN HELL for Manziel to play for us. I will not change my mind. So what’s Ur plan??”

“Vince – we have no intention of signing him, none whatsoever. We’re just milking the story to stay in the news. I’m happy to categorically rule him out but both Jeffrey and I think it is worthwhile to milk it until the showcases are finished (July 12). At that point we can say he doesn’t fit into our plans.”

You can view a screenshot of the text messages below: 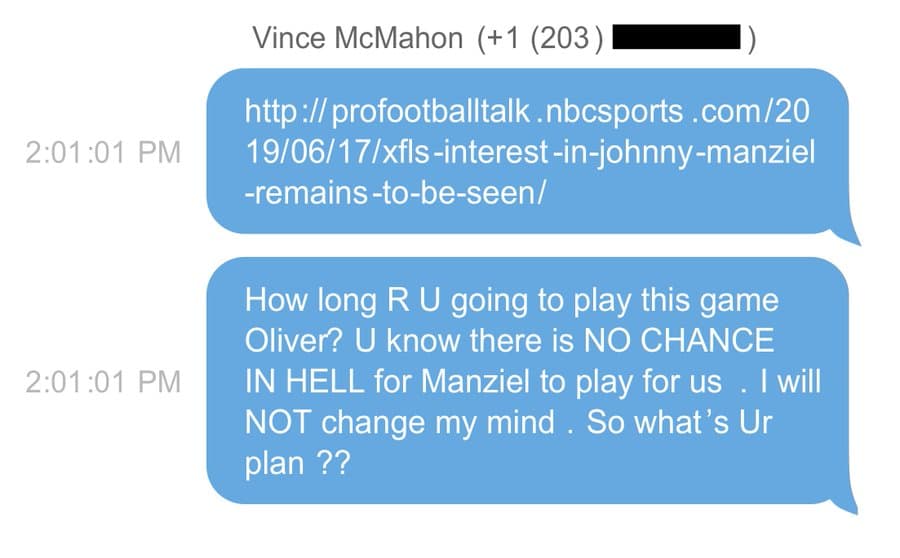 Also Read: Jim Johnston Reveals Interesting Story About How He Came Up With Vince McMahon’s Theme Song “No Chance In Hell”

3. The Undertaker vs. Ray Hudson