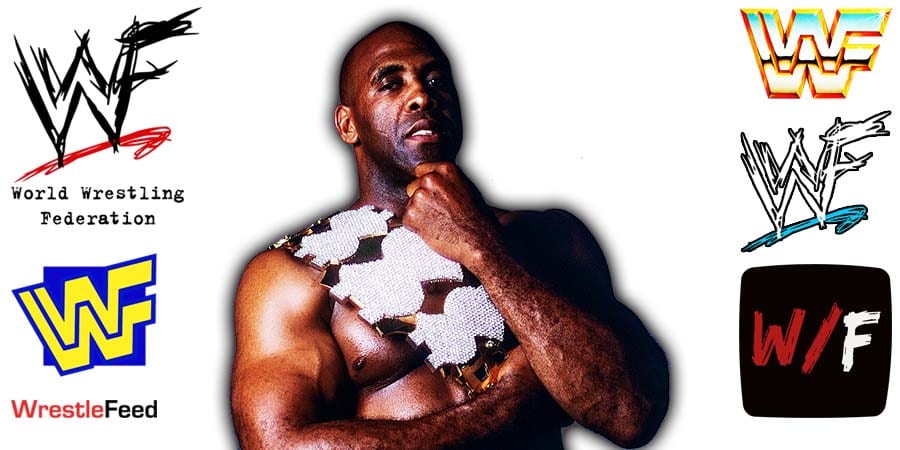 Most Old School Wrestling fans on the internet have heard about the ‘Lonely Virgil’ phenomenon, which involves WWF Veteran Virgil setting up his merchandise table at strange places like flea markets, subway stations, trade shows, exhibitions…

On his official Twitter account, Virgil posted photos of him and former IMPACT Wrestling General Manager of the Knockouts division, Brooke Hogan, who’s the daughter of WWF Legend Hulk Hogan.

“I don’t care who your daddy it still be $20 for a pic $30 for the autograph combo honey. #meatsaucemadness”

I dont care who your daddy it still be $20 for a pic $30 for the autograph combo honey. #meatsaucemadness pic.twitter.com/xIV4utADPr

The joke is about him having a reputation to overcharge fans for photos and autographs, which he frequently did on many occasions in the past 10 years or so.

Here’s what his former (kayfabe) boss, “The Million Dollar Man” Ted DiBiase had to say about Virgil a few years ago:

“You know the thing about Virgil, or his real name is Mike Jones, when we were together he was never a problem. He didn’t drink, didn’t smoke, didn’t do drugs, and he was always on time. Of course, you know you lay the foundation down when the relationship begins, and I think Virgil understood at least what his job was and he knew where his place was in means of the pecking order.

He never got out of line and there was never any real problem with the guy. I guess the nicest way to say it is sometimes you didn’t think that the elevator went to the top floor. He wasn’t the brightest guy, you know? I always got along with him though. We would do our thing on the road and then I would see him in three days or a week, whatever it was at the time. I didn’t really socialize a lot with him so to speak, but we had a great working relationship and we were friends. I don’t know anything about Mike’s personal life now.

I knew back then that he lived at home with his mom, and post wrestling, according to him, he was a substitute school teacher and taught math. I’m not sure about that either or sure about any of that.

Here is the thing where he really hurt himself and our relationship: The guy’s got to make a living, and I understand that. He was struggling and he had gone to some comic con events to do autograph signings. He started doing that long before I ever started doing it because when I got out of wrestling I went right into this ministry that I’ve been doing. I was spending most of my time speaking at churches and speaking in schools and things of that nature.

I didn’t do a lot of autograph signings, but I found out when I started doing a couple days, is that what he would do is call these promoters and say, ‘Would you like to book Ted and I’ and they would say sure. He paid his own way and he would pick up his own hotel. What he would do is he would go or wait like a week or two weeks out and then call them and say ‘Something has come up and Ted won’t be able to make it, but I will still be there’. I was oblivious to this and never knew what he was doing. It was just one of those things that I found out about later on.

Then when I started doing more of the autograph signings and events like that, some of these promoters would say, ‘We got a call from Virgil so that works fine’. What he was doing was going on my website and looking at where I was booked and tried to add himself to the deal. I just had to put my foot down say, ‘Look Mike, I like you, I am more than happy to work with you, but if I think it’s right and that you should be there with me to do this then I’ll let you know. Do not call these promoters and try to invite yourself to these events, you can’t just do that’. I think that’s what hurt him.

I know somebody told me that he actually set the table up in Grand Central Station, is that true? I just couldn’t believe that, it’s just unbelievable. I do know this: no matter where he does go, wherever he sets up a table, there’s a big banner behind him and it’s a picture both of us. He is advertising Million Dollar Man and Virgil, but the Million Dollar Man is no longer there with him. It’s just sad, but I don’t wish Mike any ill at all. You sometimes reap what you sow. You do things the wrong way and it comes back to bite you. I really think that is what happened to him.”

It was broadcasted from the Veteran Memorial Auditorium in Des Moines, Iowa and featured matches, interviews & segments on the road to the ‘WCW Bash at the Beach 2000’ PPV.

– Jeff Jarrett vs. Kevin Nash vs. Goldberg vs. Scott Steiner