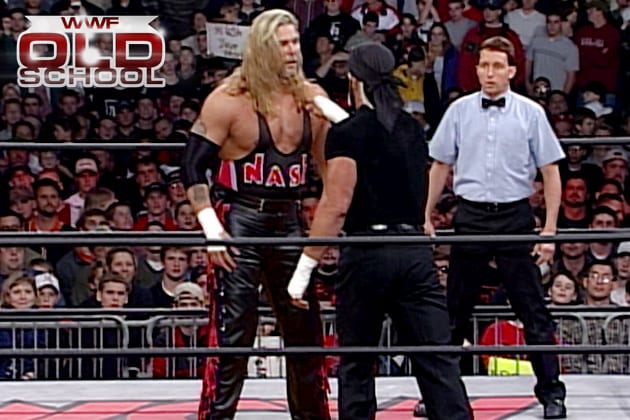 The Monday Night Wars is an event in history which is monumental towards todays WWE. Without the 5-and-a-half year battle for Sports Entertainment supremacy, there may have been no ‘Attitude Era’, and who knows if WWF would have lasted with the cheesy product they were producing. In the end, the WWF prevailed in 2001, and WCW died a slow and very painful death. Culminating with the loss of viewership, drained network funds, talent laziness, backstage politics and bizarre television, WWF, once it gained control, never looked back and WCW stayed down for the count. Many historians or common Joe wrestling fans try to pin the blame of the Death of World Championship Wrestling on many things including; Vince Russo, David Arquette’s world championship reign, lame storylines and talent behaviour. But no, the reason WCW closed its doors is because of one very simple poke of a finger.

1998 saw the World Wrestling Federation’s very first ratings victory in the Monday Night War against WCW Nitro following an 83-week drought. During these 83 weeks, the World Wrestling Federation ran storylines such as ‘Pillman’s got a gun’, The Formation of DX and the debut of Kane. Easily the product was better, but wrestling fans were too used to watching Hogan make 5 title defences of his championship a year and Sting flying around the arena. By the time Austin faced McMahon for the first time, it only took the WCW 6 months before its final recorded ratings victory. Frankly, the reason it lasted that long is because the World Heavyweight Champion at the time was Goldberg.

Goldberg was an intense character with limited move set, but the fans loved his attitude and his undefeated streak. Goldberg sold out arenas because he was such an extraordinary talent. Looming towards Starrcade 1998 (WCW’s WrestleMania equivalent), a decision was made to end Goldberg’s streak, and therefore, his title reign. Kevin Nash, who had his hand in creative at the time, had himself go over Goldberg, in an infamous WCW moment in history. With ratings still close at this time, ending Goldberg’s streak can be considered both a good and bad move. A good one due to Goldberg obviously needing to extract revenge and cause chaos around the entire WCW roster, which would’ve spiked viewership, and bad because the hottest thing in WCW was robbed of his championship and momentum.

So here we are, January 4th, 1999, one of the most important days in wrestling history. WCW’s show boasted a championship rematch between Kevin Nash and Goldberg in the sold out Georgia Dome, in Goldberg’s home town of Atlanta and the return of Hulk Hogan. Those two points alone was enough for ratings to swing the way of WCW. Monday Night Raw had been having a decent show, and only halfway through the program, a WWF Championship match between Mankind and The Rock was announced. WCW was still winning that night, then night then turned ugly for WCW. Throughout the show, storyline had been developed to have Goldberg be arrested by Atlanta police for alleged abuse of Elizabeth and Hulk Hogan had taken the title shot instead. So we weren’t getting Goldberg wrestle for the championship that he lost in such a screwy fashion in his home town and he was getting arrested for something he didn’t do. This followed by Tony Schiavone announcing that Mankind was defeating the Rock for his championship that night caused ratings to plummet for Nitro as angry viewers who weren’t going to see Goldberg get revenge, decided to watch Mick Foley win his first and very much deserved World Championship.

The only hope WCW had left this night was the main event of Kevin Nash v Hulk Hogan, who had come out of retirement that night, for the WCW Championship. Hogan had been greeted to a tremendous response and faced Kevin Nash in the worst match in history in my opinion. 40,000 people screaming for the confrontation as the crowd went ballistic. Nash and Hogan sized each other up, and after a little bit of backwards and forward taunts, Hogan simply poked Nash in the chest, Nash took a bump and Hogan covered him for the one-two-three, reuniting the nWo as a whole. This became known as ‘The Fingerpoke of Doom’.

This ‘match’ is seen as the reason for WCW’s downfall firstly because it screamed the fact that wrestling is fake. Kevin Nash, the world champion, just lets Hogan take it from him? If you’re in wrestling, you’re in to be worlds champion and he just gives it to Hogan so that their two stables can reform.

Goldberg’s streak was something so monumental that whomever snapped the streak would live as the man who did it and would be seen as unstoppable. Kevin Nash, 8 days after beating one of the most impressive winning streaks in history, lost in 30 seconds to Hulk Hogan who didn’t do one move. This makes me wonder, ‘What was the point of ending the streak and winning the Worlds Championship at your version of WrestleMania, if you didn’t even want it? Why would you ruin the streak then and not wait for another person more deserving of a lengthy title reign to do it?’

Stories have differed as to why this was made as the match. To join each other’s sides, you could’ve had a half an hour back and forth contest with no interference, which would’ve made the championship seem incredibly important and sought after, rather than lying down letting someone else have the most prestigious prize in the company. Or, postpone the nWo reunion to a time most suitable.

The fans were disgusted as they left the celebration to silence, wishing they were home watching Raw.

Goldberg came to the ring and got flattened by the group, giving the crowd with a more bitter taste in their mouths.

Nitro ended up with a ratings loss of 5.0 and Raw pulled a 5.7. From November 1998, Nitro never defeated Raw in the ratings again, and this is an example of why. Nitro had one higher showing in the ratings months later, but by the end of 1999 barely managed to garner 3.0 ratings, whereas in that year, Raw received 8.1 and 8.4 on two separate segments.

This awful display of what WCW was all about set a domino effect, which caused loss of viewership, drained network funds, more talent laziness, more backstage politics and incredibly bizarre television. This caused WCW to make snap and hasty decisions to employ Vince Russo, give the WCW Championship on David Arquette and create lame storylines that no one cared for. Surprisingly, WCW lasted two full years after this incident, but closed its doors in March 2001.

If WCW had gotten the win that night in January 1999, could they still be around today?