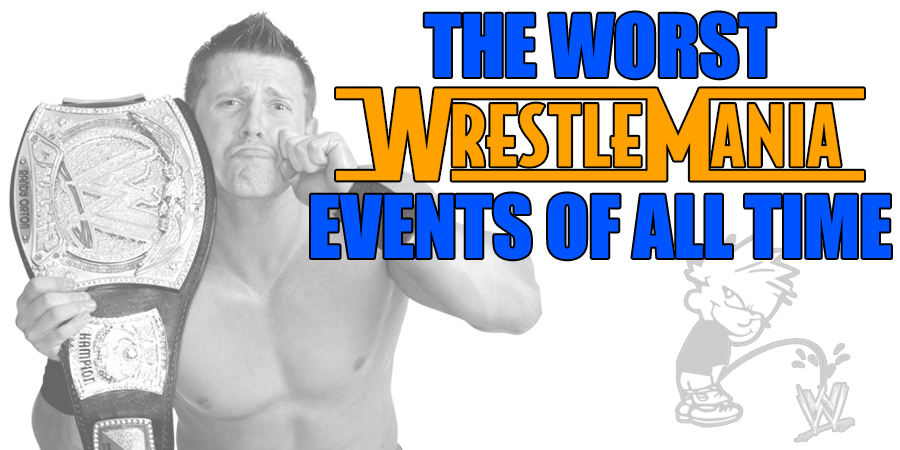 Keep in mind that even the worst WrestleMania Events (except for the #1 on this list) are still a 100 times better than most of the generic filler-PPVs like ‘WWE Battleground’, ‘WWE Payback’, ‘WWE Over The Limit’, …

We have simply listed the worst WrestleManias in comparison to all other annual WrestleMania events.

It’s literally impossible to do an unbiased or even factual list here, because everybody basically enjoyed the events during their childhood, so this list is based on the OLD SCHOOL point of view, written by someone who lived through all the WrestleMania events, and watched each and every one of them when they happened, starting with the very first ever WrestleMania in 1985.

For those of you who had to watch WrestleManias that were before your time, on VHS or DVD, it’s impossible to create the same feeling and the same emotional investment into the feuds, that we had watching it live, and knowing all the backstories from the weeks leading into the event.

While this is among the weakest WrestleManias ever, we only put it as #5 because of the sheer Old School star power that was involved.

Not one match was really great or memorable though, and a Football player main eventing the event and going on last, certainly didn’t help either.

The Highlight has to be the Diesel vs. Shawn Michaels match, where they had a decent build up, heading into WrestleMania.

Oh and before anyone even thinks about complaining about the ranking of WrestleMania 11 on this list, keep in mind we’re an OLD SCHOOL Wrestling website and 99% of all Old Schoolers would rather see a WrestleMania with these great Old School Stars, Veterans and Legends, than watching any of today’s modern day era WrestleManias full of former Indy Wrestlers.

WrestleMania 11 was bad and it made our Top 5, but it’s certainly not nearly as bad as the others on our list.