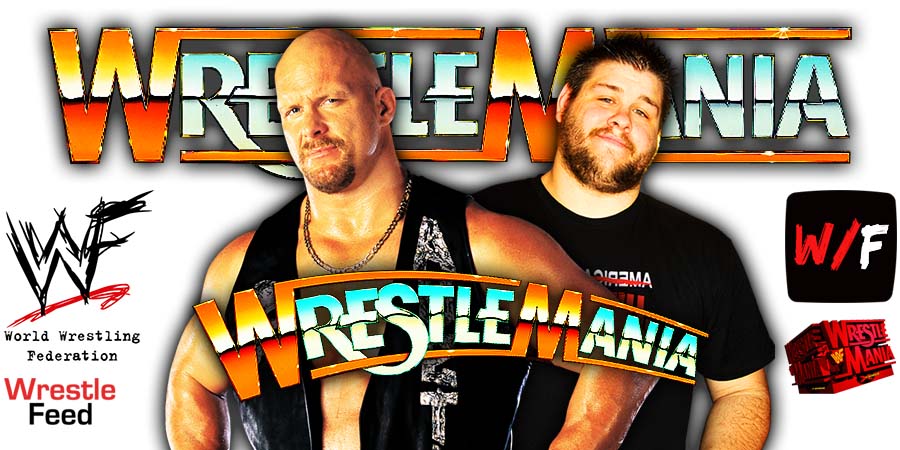 This is part 10 of our WrestleMania 38 live coverage (part 9 is here).

Up next is the main event and Kevin Owens comes out and says Austin is the worst role model of all time in wrestling.

Stone Cold Steve Austin then comes out to a thunderous pop!

Austin throws the KO Show stuff out of the ring to pose for the fans. Owens told him to stop posing as it’s his show and told him to take a seat.

Austin said Owens wants to sit here with his stupid haircut and wants to talk after talking all the sh*t. Austin called him a stupid son of a b*tch.

Owens said he lied about calling Austin to come out here to talk. Owens said he called him here to challenge him to a match – to a No Holds Barred match right here, right now. 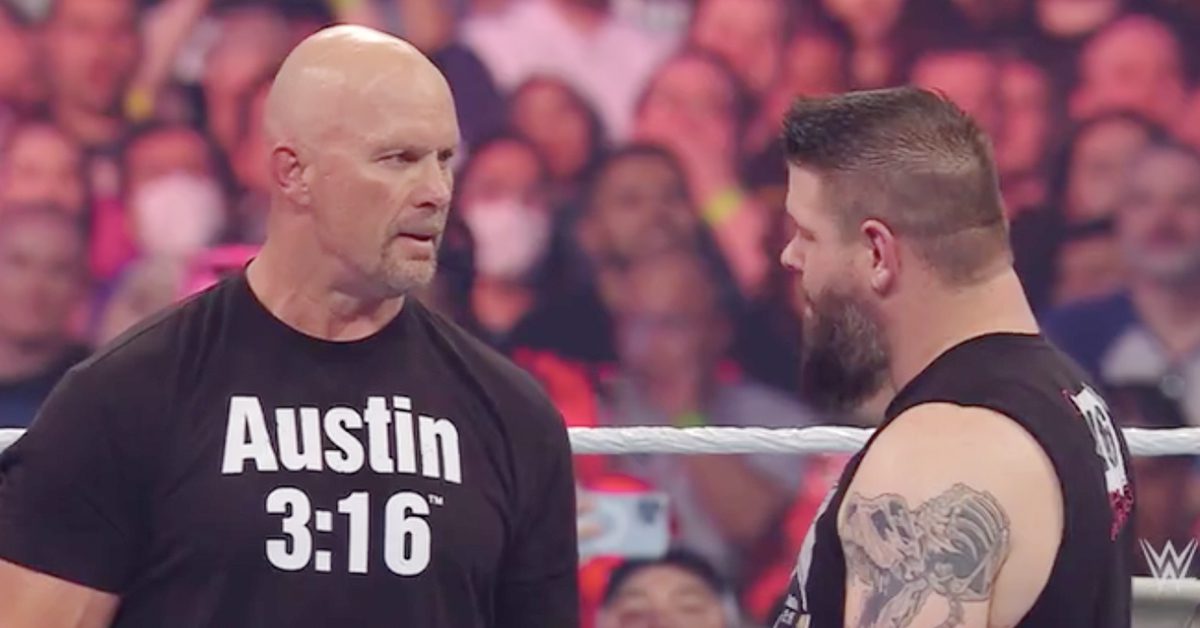 Owens said Austin can’t even talk right now because Austin knows he can’t beat him. Owens said if he isn’t going to fight right now, then he should go back to his ranch.

Austin then asked the fans if they want to see him beat Owens’ a$$, then give him a Hell Yeah! Fans said hell yeah and Austin called the referee.

The bell rings and the match is on! Both men start trading punches and then Austin begins stomping a mudhole in Austin in the corner!

Austin begins drinking beer in the middle of the match! They are brawling outside the match and Owens sends Austin face-first into the ring post!

Owens takes out a Table now. Owens wants to put Austin threw a Table, but Austin counters and sends Owens through the table!

Austin and Owens are now brawling in the crowd! Austin is looking to suplex Owens on the concrete, but Owens counters and he suplexes Austin on the concrete floor!

They are now back in the ringside area and Austin slams Owens on top of the announce table, but the table didn’t break.

Austin is standing on the top of the announce table and drinking beer again. He now punches Owens in the head 10 times!

Austin now spits beer in Owens’ face! Owens now gets on Austin’s ATV, but can’t start it and Austin catches him. Austin gets on the ATV with Owens, starts it and takes it to the entrance stage.

They return to the ring and Austin is drinking beer again. Owens takes advantage and hits a Stunner! Owens goes for the cover, but Austin kicks out!

Owens brings a Steel Chair and swings it, but misses. The chair ricochets off the ropes and hits him in the head!

Austin hits the Stunner and pins him!

Austin does his iconic beer bash!

Austin stuns Owens again after the man and two Police Officers take Owens to the back for disrespecting Texas.

Austin took the mic and said it’s good to be back in Texas and that’s the bottom line because Stone Cold said so!

Austin then shared a beer with the referee and asked for more beer and called Byron Saxton to the ring to share a beer.

Austin hits him with a Stunner too! Austin then shared a beer with his brother in the ring! What a moment!

A toast for @steveaustinBSR and his brother at #WrestleMania! pic.twitter.com/Gqk1QKpApQ

Steve then raised a toast to the WWE Universe to end the show. What a show!