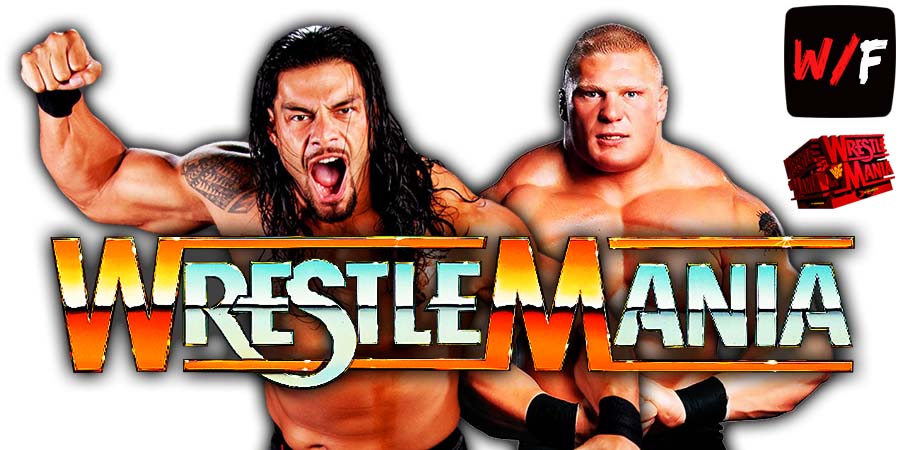 After Stone Cold Steve Austin stunned everyone, now it’s time for the main event of the evening.

The longest reigning World Champion of the last 35 years makes his way out first – Universal Champion Roman Reigns. Paul Heyman and SmackDown Tag Team Champions The Usos are with their Tribal Chief.

Roman takes the mic and told the fans at WrestleMania to acknowledge him and they did. “Roman” chants broke out.

Out next is WWE Champion Brock Lesnar. Lesnar gets in Roman’s face and screams.

This is being billed as the biggest WrestleMania match of all time, because for the 1st time ever 2 Men’s World Titles are on the line in the same match at WrestleMania.

Heyman announces Roman in the same way he used to announce Lesnar back in the day.

Lesnar then did his own ring introduction. The match begins and Lesnar immediately removes his gloves, indicating he’s coming for blood like he said on the Road to WrestleMania.

Lesnar begins dominating and is manhandling him from one corner to the other.

Lesnar is trying for a Suplex, but Reigns is hitting him with Elbow. Lesnar hits 3 back to back Belly To Belly Overhead Suplexes. Lesnar sends Roman out of the ring.

Heyman distracts Lesnar on the outside and Roman spears Lesnar through the barricade at ringside.

Lesar gets in the ring, Reigns hits a Spear and goes for the Spear, but The Beast kicks out.

Lesnar is stunned, but is laughing. Reigns went for another Superman Punch, but Lesnar counters and takes Roman to Suplex City! Lesnar’s stomach is hurting after 2 Spears.

Brock hits 5 German Suplexes. Lesnar goes for the F5, but gets out and pushes Lesnar into the turnbuckle and then hits another Superman Punch.

Roman goes for the Spear, but Lesnar picks him up and hits the F5! Lesnar goes for the cover, but Roman kicks out!

Brock picks him up for the F5 again, but Roman gets out and Spears Lesnar into the corner into the referee. Roman takes advantage and low blows Lesnar.

Roman hits Brock in the head with the belt. Roman goes for the cover, but Brock kicks out.

Roman hits Brock with a Momentum Spear on his back to target his kidneys and goes for the cover, but Brock grabbed the bottom rope.

Roman hits another Spear, but Lesnar locks in the Kimura Lock! Roman is reaching for the bottom rope, but can’t. Heyman pushes the bottom rope a little bit and Roman grabbed it.

Heyman is motivating Roman big time and Roman said his shoulder is out after the Kimura Lock.

Brock picks Roman for the F5, but Roman counters and hits a Spear for the win!