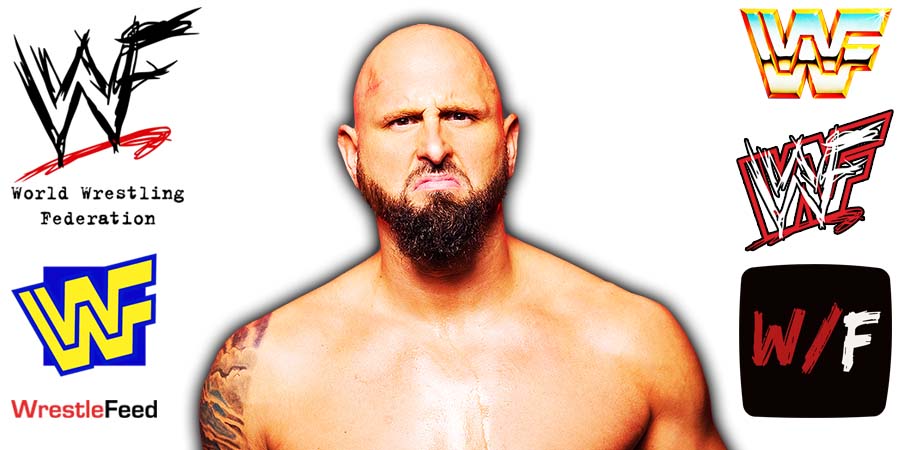 As we have noted before, despite returning to the WWE last week, Karl Anderson is still holding a non-WWE title.

He is the Never Openweight Champion in New Japan Pro Wrestling and is even advertised to work NJPW’s Battle Autumn show on November 5th, where he’s scheduled to defend his Title against Hikuleo.

This is going to be interesting, because Anderson is also scheduled to team up with Luke Gallows & AJ Styles to face The Judgment Day (Finn Balor, Damian Priest & Dominik Mysterio) in a 6-man tag team match at Crown Jewel in Saudi Arabia on the same day, November 5th.

On tonight’s episode of NXT, Gallows & Anderson teamed up with Cameron Grimes to defeat Schism.

During this match, Vic Joseph acknowledged Anderson being a champion in NJPW on commentary, when he said the following:

“Speaking about going around the world, that’s exactly what O.C. has done. They shocked the world when they returned to the WWE. The O.C.’s been everywhere. I mean Karl Anderson is still a champion in Japan.”

Tap here to read the complete results from this week’s NXT (which went head-to-head with AEW Dynamite).

This episode was broadcasted from the AllState Arena in Chicago, Illinois and featured matches & storyline segments on the road to the ‘WWE Taboo Tuesday 2004’ PPV.

– Shelton Benjamin vs. Rhyno vs. Tajiri vs. Jonathan Coachman vs. Hurricane vs. Christian