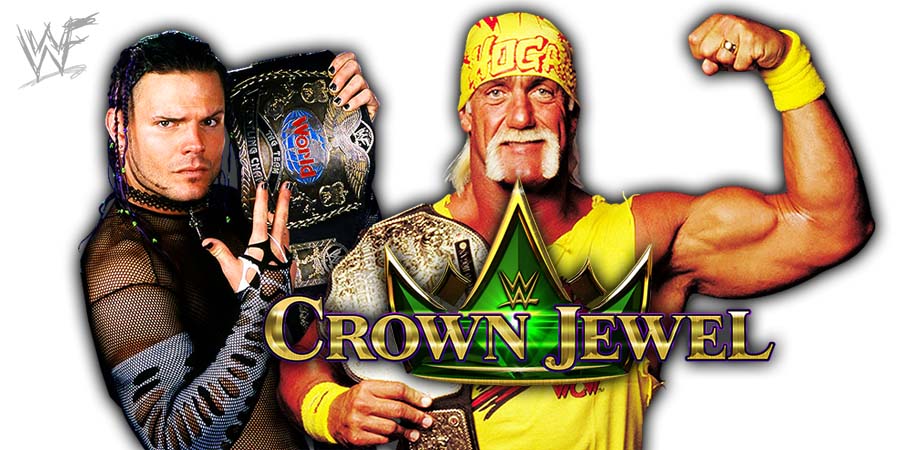 This is part 4 of our WWE Crown Jewel live coverage (part 3 is here).

Up next is the SmackDown Tag Team Championship match. The New Day make their way out first to a special entrance where they are coming on a “magic carpet”.

Out next are the SmackDown Tag Team Champions The Bar (Sheamus & Cesaro), accompanied by The Big Show!

Big Show gets a big pop and pyro entrance. Big E & Kofi Kingston from The New Day will compete in this title match.

Sheamus & Cesaro are tagging in & out and working on Kofi and not allowing him to tag in Big E.

Kofi finally tags in Big E and he comes in with a series of suplexes. Big E is looking to Spear Sheamus through the ropes, but Sheamus connects with a Knee.

Big E & Kofi hit their finisher on Sheamus and go for the cover, but Cesaro breaks it up.

The referee is distracted and Big Show hits a Knockout Punch on Big E! Sheamus followed this with a Brogue Kick on Big E to pick up the win for his team!

Up next is a Semi-Final match from SmackDown’s side for the WWE World Cup – The Miz vs. Rey Mysterio.

Miz makes his way out first, followed by Rey Mysterio.

Miz is working on Mysterio’s mid-section as he looks to beat another former WWE Champion and advance to the final.

Mysterio hits a Crossbody and goes for the cover, but Miz kicks out. Mysterio sets Miz up for 619, but Miz gets up and pushes Mysterio in the corner.

Miz hits a Skull Crushing Finale and goes for the cover, but Mysterio kicks out!

Mysterio nails the 619 on Miz! Mysterio goes for a Frog Splash, but Miz gets his knees up and pins Mysterio!

Miz has now entered the WWE World Cup final and will face the winner of the next match – Seth Rollins vs. Dolph Ziggler.

This means if The Miz doesn’t win the WWE World Cup tonight, then he’ll be fired from SmackDown Live.

Rollins vs. Ziggler in a Semi-Final match is now underway. During the match, Rollins & McIntyre come face-to-face and Rollins taunts McIntyre that if McIntyre hits him, then he’ll win the match via DQ and advance to the final.

After back & forth action, Rollins hits his old Ripcord Knee on Ziggler and goes for the cover, but Ziggler kicks out.

Rollins hits a Suicide Dive on both McIntyre & Ziggler on the outside. The action returns to the inside and Ziggler hits a Famouser! Ziggler goes for the cover, but Rollins kicks out at 2.5!

Ziggler hits the Zig-Zag and goes for the cover, but Rollins kicks out!

Rollins is now on the top rope and McIntyre pushes him off! Ziggler then nails a Superkick and gets the win!!!

The Miz vs. Dolph Ziggler is now set for the WWE World Cup final!