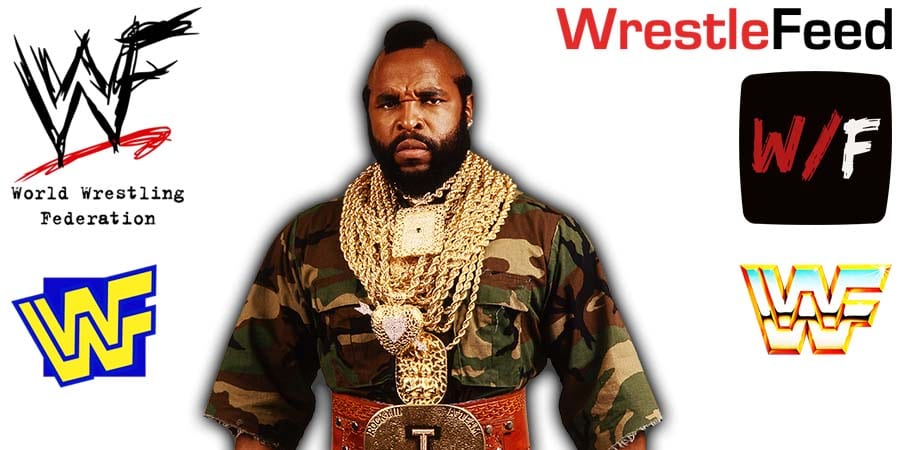 WWE Hall Of Famer Mr. T, who main evented the original WrestleMania by teaming with Hulk Hogan, was recently interviewed by WrestlingInc, where he revealed that he enjoys seeing the sons and daughters of his friends from back in the day, when he was with the World Wrestling Federation in 1984, 1985 and 1986, during the famous Rock ‘N’ Wrestling era.

Here’s what the famous Rocky III villain had to say:

“When I first heard the name Randy Orton, I was like, ‘Man, I wonder if that’s Cowboy Orton’s son’. And it was!

I said, ‘Oh man, this is wild’. Watching him has just been really amazing. Thinking about how far we’ve come, all the way from Madison Square Garden to here.

Even with The Rock, I remember his father Rocky Johnson. Man, it’s just amazing. Now you look at The Nature Boy, Ric Flair, his daughter. It’s just special.

I’m just overjoyed with stuff. I think back to meeting fans and they’d tell me about WrestleMania, and I am honored.

Like I said, I want to live off of that. I want to work hard. I don’t want to let nobody down. I still want the fans, the young fans of people to look up to me.

But I can be a lawful citizen that shows people to study hard in school, stay away from the wrong crowd, stuff like that.

I talk a lot about how I’m an old-fashioned momma’s boy, and I want kids to draw from that. You know, ‘Mr. T loves his mother, and he ain’t no simp’. Don’t worry about what they call you. You keep on loving your mother.

It’s just my rap, it’s who I am and where I come from, I want them to see underneath all the gold and the tough, gruff stuff there’s a gentle person.

My toughness allows me to reach people. We got invited to the White House to tell kids to stay away from drugs and this and that. And that’s what this is about.

Going to the hospitals and visiting the kids. I would do that when the cameras weren’t there.

Also Read: Mr. T Could Show Up In WWE Again

This episode was broadcasted from the Metro Center in Rockford, Illinois and featured matches & storyline segments on the road to the ‘WWE Bad Blood 2004’ PPV.

2. La Resistance vs. The Hurricane & Rosey