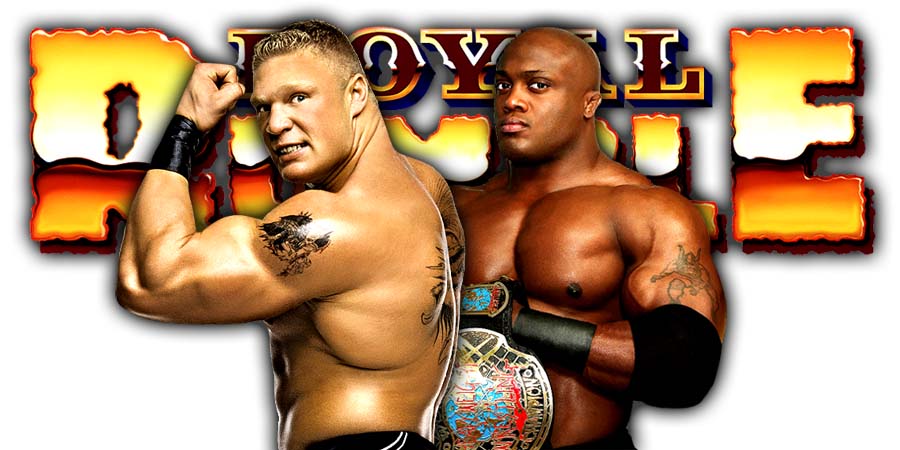 • WWE Is Planning A Mega Match For Royal Rumble 2022

Before the WWE Championship match at the WWE Day 1 pay-per-view, Bobby Lashley was interviewed backstage, where Lashley said he’d make Brock Lesnar tap out to the Hurt Lock.

During the match, Lashley hit Lesnar with 2 Spears and locked in the Hurt Lock. Brock tried to break the hold, but couldn’t and went down to his knee, but that’s when Big E broke the hold and Brock ended up winning the match a few moments later.

After the match, Lesnar and Lashley had a staredown, where Lashley wasn’t happy that Lesnar got away from him, while Lesnar laughed while looking at The All Mighty.

According to DAZN, Brock Lesnar vs. Bobby Lashley for the WWE Championship is being planned for the Royal Rumble 2022 pay-per-view on January 29:

“Sources: Have learned Brock Lesnar-Bobby Lashley is the direction coming out of WWE Day 1. The destination is the Royal Rumble on Jan. 29 in St. Louis.”

A rematch for Big E was discussed as well, but it looks like that idea was dropped because Lesnar already pinned Big E during the Fatal 5 Way match.

Also Read: WWF Legend Says He Could Come Out Of Retirement – Has Dropped 50 Lbs