Reigns goes for his jumping clothesline, but Strowman catches him by the throat and looks to chokeslam him but Reigns manages to get out of his grip.

Reigns hits a big Samoan Drop! Reigns now hits the Drive-By on the outside.

Reigns does his taunt outside the ring and goes for the spear, but Strowman picks him up for the powerslam but Reigns gets out of his grip again and pushes Strowman into the steel post.

The action gets back into the ring and Reigns hits a big spear, but Strowman kicks out!

Reigns now nails two Superman punches and goes for the third, but Strowman locks in his submission and then hits his finisher powerslam, but Reigns kicks out and Strowman is shocked! 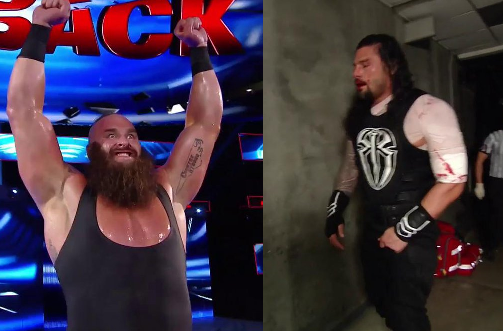 "I'M NOT FINISHED WITH YOU!" has to be echoing through @WWERomanReigns' mind right now… if he knows where he is! #WWEPayback pic.twitter.com/uKTLjJccHv