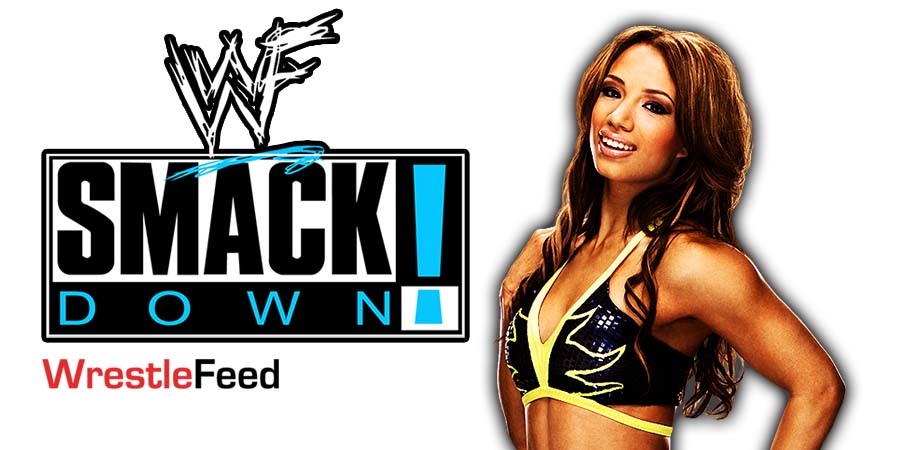 – Tonight’s SmackDown kicked off with John Cena. John said Universal Champion Roman Reigns rejected his challenge for SummerSlam 2021 because he didn’t like that he hasn’t changed, while Roman has to change every 2 years because everyone stops caring about him.

Cena said guys like him, Stone Cold Steve Austin and The Rock don’t need to change who they are.

John then claimed that the real reason Roman turned him down is because he’s afraid of how he’d make him look.

Baron Corbin interrupted. Corbin said his life is hell right now. Corbin revealed his wife left him because he couldn’t perform in the bedroom, and took their kids with her.

Corbin asked Cena for some money, and Cena gave him some. Corbin wasn’t happy about the amount he got and said he knows Cena is rich, and is being a selfish tightwad and is now a Hollywood Sell Out. John then gave an Attitude Adjustment free of charge.

– Kayla Braxton interviewed Bianca Belair in the ring and she talked about being the SmackDown Women’s Champion for over 100 days.

Carmella interrupted and wants another shot at the Title and made an excuse for her loss at Rolling Loud last week.

Zelina Vega interrupted and told Carmella that she would be a three time loser, and claimed everyone wants to see an up-and-coming talent like her to face Bianca.

Carmella & Zelina teamed up and attacked Bianca, but the returning Sasha Banks made the save.

– Reginald (c) def. Chad Gable via DQ to retain the 24/7 Title (Otis interfered to cause the disqualification)

– Roman Reigns & Finn Balor had a Contract Signing for a Universal Championship match at SummerSlam 2021. Roman signed it, and told Finn that if he signs the contract he’s going to smash him and send him back to NXT.

Baron Corbin came out of nowhere and attacked Finn, and is about to put his name on the contract. John Cena then ran out and took out Corbin, and signed the contract.

It will now be Roman Reigns vs. John Cena for the Universal Championship in the main event of SummerSlam 2021.

– Edge came out and got attacked by Seth Rollins during his entrance. Rollins said if he can’t be the Universal Champion, then neither can Edge.

This episode was pre-taped in Ocean City, Maryland and featured matches, promos & storyline segments on the road to the ‘WWF SummerSlam 1994’ PPV.

– The Undertaker vs. Matt Hardy