This is part 8 of our WWE Super Show-Down Live Coverage (part 7 is here).

Up next is the #1 contenders match for the WWE Championship.

This turns out to be a super short match with Daniel Bryan pinning The Miz to become the new #1 contender for the WWE Championship.

Michael Cole then announces that AJ Styles will defend the WWE Championship against Daniel Bryan at WWE Crown Jewel PPV. 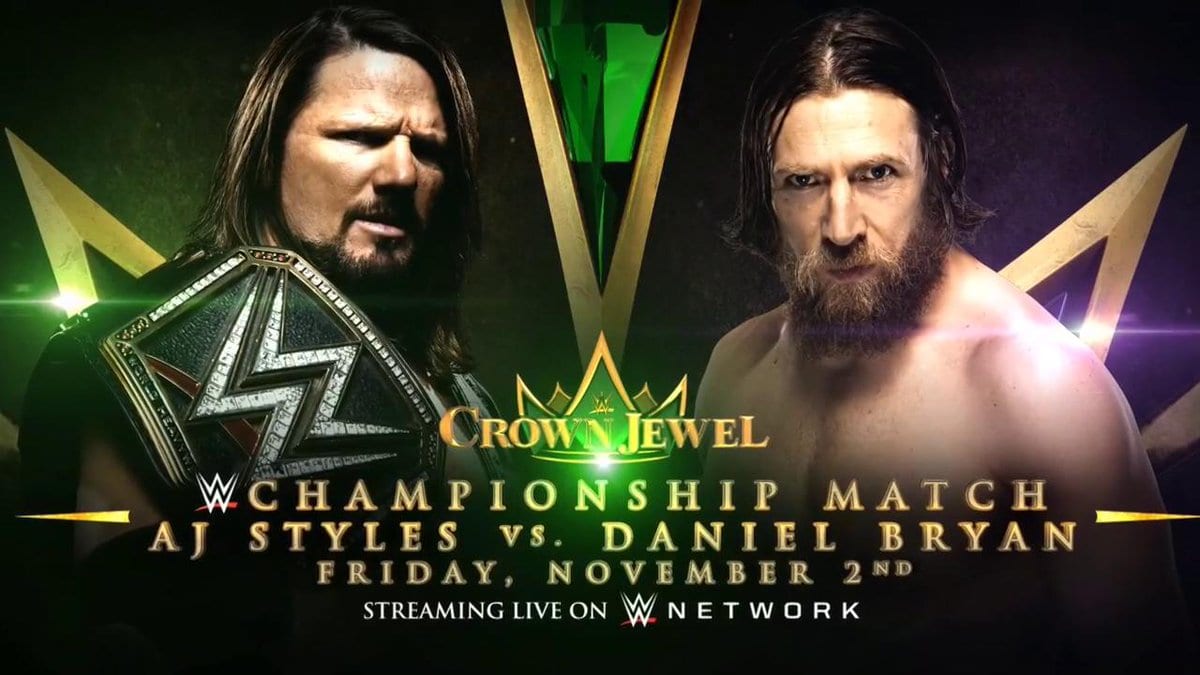 Also, a SmackDown Women’s Championship rematch between Becky Lynch and Charlotte Flair is announced for next week’s SmackDown Live.

Up next is the main event of the evening, it’s The Undertaker vs. Triple H for the ‘Last Time Ever’.

Triple H hasn’t defeated The Undertaker in a singles match in 16 long years!

JoJo announces that the match will now be No Disqualification! The Undertaker is announced at 302 lbs.

‘This Is Awesome’ chants begin. Triple H punches Taker multiple times and Taker goes for it, but misses.

Now Triple H is going for Old School, but Taker catches him by the throat and lands a series of punches.

The Undertaker goes for Old School and hits it!!!

The Undertaker hits Snake Eyes on HHH and goes for a Big Boot, but Triple H nails a knee.

Triple H clotheslines Taker out of the ring and HBK pushes Taker into the Steel Post!

Triple H hits a Neck Breaker on Taker and goes for the cover, but Taker kicks out. Triple H nails some big punches on Taker, but Taker comes back with a series of punches and drops HHH down.

Taker now throws HHH out of the ring and then throws him over the barricade into the ring bell area. Taker is now clearing the announce table.

HBK distracts Taker and HHH attacks Taker from behind. Taker throws HHH into the crowd and they are now fighting in the crowd. Taker is now choking HHH with wires now, but HHH manages to escape.

They are now back to the ringside area and Taker is punishing The Game. HBK approaches Taker and Taker punches HBK down!

Taker picks up a Steel Chair and gets into the ring and Triple H hits a leg drop. HHH picks up the chair is going to hit Taker with it, but Taker nails a Big Boot!

Taker nails HHH with the chair and HHH goes out of the ring. Taker hits a vicious chair shot to HHH on the outside! ‘Holy $hit’ chants begin!

Taker kicks down HBK again and it looks like Taker is going for a Suicide Dive, but HHH hits Taker with a Steel Chair!

HHH goes on the top rope with a Steel Chair and jumps to hit Taker, but Taker catches him and hits Chokeslam!

Taker hits the Tombstone Piledriver and goes for the cover, but HHH kicks out!!!

Taker knocks down the referee! Taker hits HHH with a chair and asks HBK if he’s watching.

Taker hits HHH with another brutal chair shot! Taker now puts the steel chair around HHH’s neck and HBK is pleading Taker not to do whatever he’s planning to do.

Now HHH wraps a chair around Taker’s neck and jumps on it from the top rope and goes for the cover. HHH had the win, but Kane pulled the new referee out!

Both men are down now. HBK now has the Sledgehammer with him and he passes it to Triple H.

Taker picks up a Chair. It’s Chair vs. Sledgehammer! HHH nails the hammer on the chair and right into Taker’s face!

HHH goes for the cover, but there’s no referee in the ring.

Taker locks-in the Hell’s Gate on HHH and HHH is now choking Taker with the Sledgehammer while being in the hold. Both men are down. Crowd gives a big round of applause to both men for this great battle!

HBK hits Kane with a Sledgehammer and Taker throws HBK out of the ring.

Taker now picks up the Sledgehammer but HHH comes in and Taker hits a back bodydrop on HHH.

HBK hits Sweet Chin Music on Taker twice, HHH nails a Sledgehammer shot and a Pedigree to defeat The Deadman!

Taker is shaking his head in the corner after the match while HHH & HBK are hugging each other.

All four men show respect after the match and pyro go off, but Taker & Kane then laid out HHH & HBK.

THE UNDERTAKER WITH A TOMBSTONE PILEDRIVER TO TRIPLE H!!!!! #WWESSD pic.twitter.com/fhMghmNUKF

WWE Super Show-Down goes off the air with The Brothers Of Destruction standing tall!