On this week’s Legends Night episode of RAW, Cardi B’s name was dropped in a backstage segment between WWE Hall of Famer Torrie Wilson and then 24/7 Champion Angel Garza.

After this, Cardi B noted on Twitter that she used to watch WWE during the Ruthless Aggression Era and had some pleasant exchanges with the likes of Trish Stratus and Sasha Banks.

However, things got rough when RAW wrestler Lacey Evans entered the conversation and began working an angle with Cardi.

Lacey used this opportunity to get a lot of heat on herself from Cardi B diehards, as she tweeted the following about Cardi and her rival, Nicki Minaj.

“Careful what you wish for ya nasty….. we aren’t @NICKIMINAJ

You’ll get sent home with more than a busted eye. 💅👠”

In case you don’t know, Lacey is referring to the alleged altercation which took place between Cardi and Nicki at a party in New York, which ended with Cardi getting a bump above her eye because of an elbow she received from Nicki’s guard.

Cardi didn’t appreciate what Lacey said, and tweeted out the following:

“A white woman can’t never put fear on me sweetie….Got me f****d up. I was showing love to WWE the whole night yesterday I don’t know where the f**k you came from with your unnecessary bullsh*t.”

The tweet was later deleted by Cardi, but you can view a screenshot of it attached below. 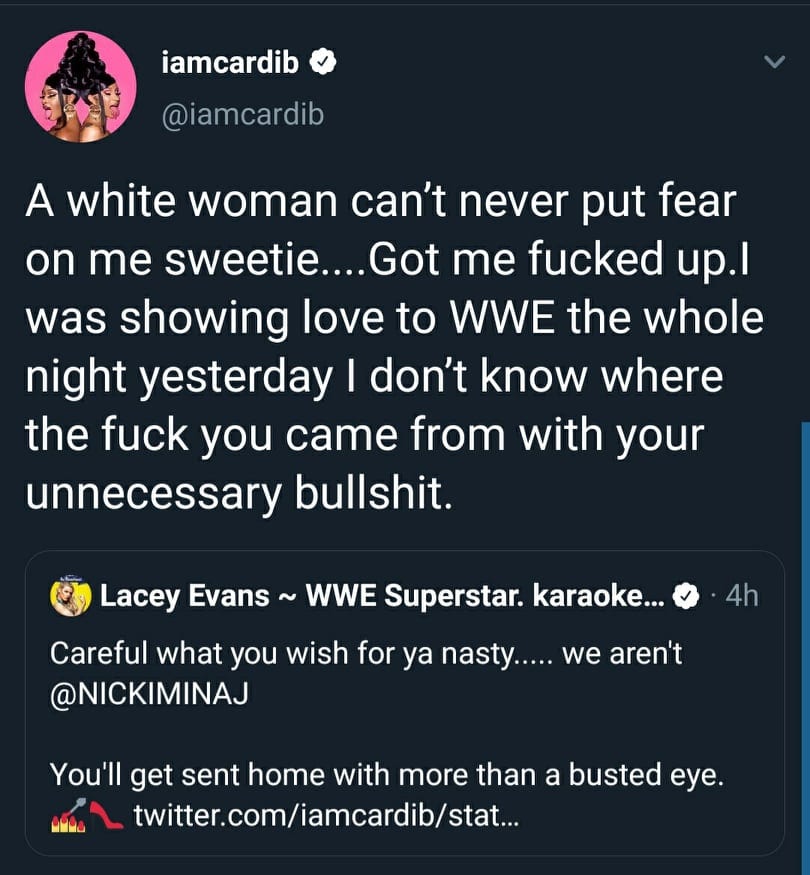 Lacey then responded to her:

“Aww bless your heart! @iamcardib U got it all wrong. I heard DEBUT and was giving you a friendly heads up!🥺 but since you wanna be a bad a$$… keep me in mind when/if you show up to @WWE. Ill kick your a$$ while listening to your music. 💅👠 #PullUp”

Aww bless your heart! @iamcardib U got it all wrong. I heard DEBUT and was giving you a friendly heads up!🥺 but since you wanna be a bad ass… keep me in mind when/if you show up to @WWE. Ill kick your ass while listening to your music. 💅👠 #PullUp https://t.co/Yirw1ELOAL

It’s possible that WWE set up this Social Media angle, as they do that a lot nowadays, to plant seeds for Cardi B’s appearance at WrestleMania 37, as WWE is already teasing a possible appearance from her at the Show of Shows:

#WWERaw Legends Night meant the stars were out, and that includes @iamcardib thanks to a shoutout by @Torrie11! https://t.co/fPSlHpdLlR

Cardi herself teased a WrestleMania appearance with the following tweet:

@wale don’t gotta tell me twice .This me On my way to wrestlermania to collect my check 😩😩😂😂😂. https://t.co/tP4adVJhpv pic.twitter.com/72dYflv42G

It’ll be interesting to see if all of this eventually leads to a WWE appearance for Cardi B at WrestleMania 37, especially at a time where the status of fans appearing in person at WrestleMania is up in the air.