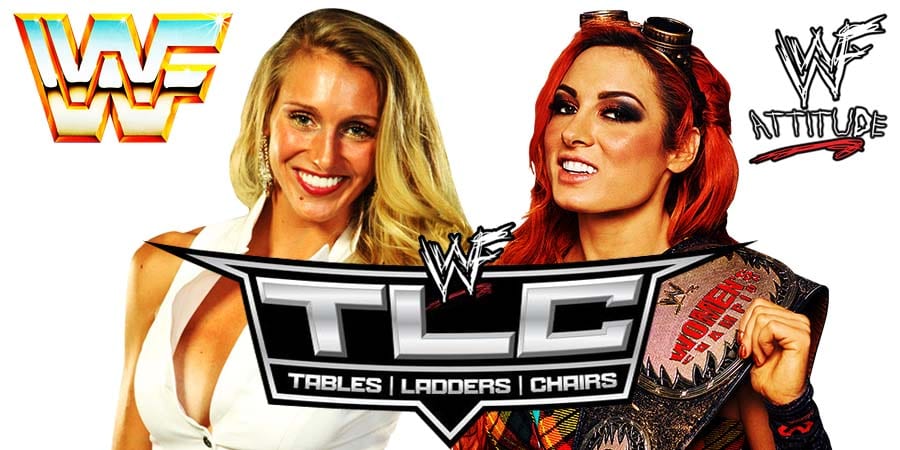 It should be noted that a Women’s TLC match main evented TLC 2018 PPV last year and it ended with Asuka defeating Charlotte Flair and Becky Lynch to win the SmackDown Women’s Championship.

The match begins and Becky & Charlotte start using the weapons outside already.

Charlotte and Becky are on top of two announce tables and they are just throwing Kairi from one table to another.

Asuka attacks Becky & Charlotte with a Steel Chair inside the ring.

Kairi goes hiding under the ring. Becky & Charlotte pull her out, but Kairi has a Fire Extinguisher in her hands and she sprays it on both of her opponents!

Hey guys, what's up! Today on #KanaChanTV, we visit the @WWEAsuka Ranch and learn how to be a cowboy!

Becky leg drops Asuka through a Table on the outside!

Charlotte and Becky are now placed on a Table and Sane jumps from the top rope through this table on the outside, but Charlotte managed to get out of the way and Kairi didn’t get all of it as well.

Charlotte powerbombs Kairi through a Table and Asuka hits Charlotte with a German Suplex!

Asuka is now climbing up the ladder in the ring, but Charlotte and Becky attack their opponents with a Steel Chairs.

Charlotte is setting up Asuka on a Table outside and looking to hit a Moonsault, but Asuka gets up and powerbombs Charlotte through the table outside!

Becky hits a Bexploder on Asuka on Ladders outside.

Becky is now climbing up the ladder, but Asuka pulls the rope attached to the ladder to make Becky fall down.

Asuka climbs up the ladder to unhook the Titles and win the match for her team.

As soon as the match ends, Reigns, Corbin and others come out brawling. The Show ends with Reigns spearing Corbin onto all other wrestlers and security from a platform!

THIS IS STILL GOING ON?!@WWERomanReigns just SPEARED King @BaronCorbinWWE into what seems like the entire ROSTER to close out #WWETLC! pic.twitter.com/ai9Y5qU3W5