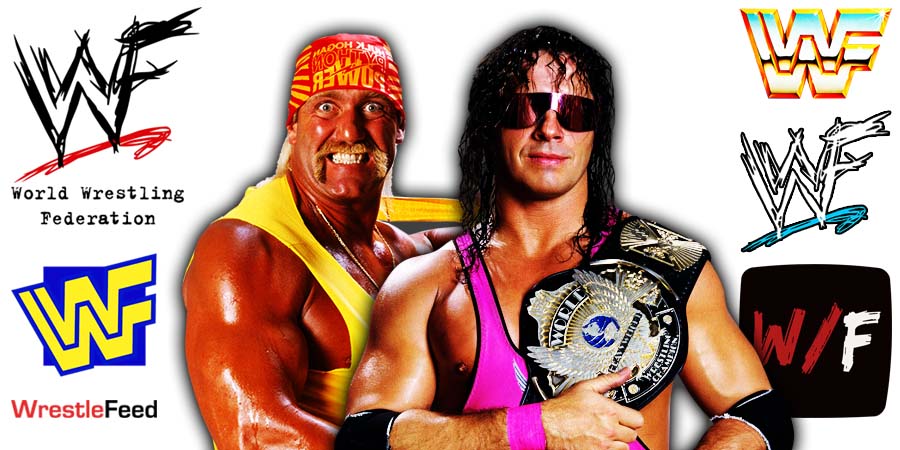 “The Immortal” Hulk Hogan is the biggest name in the history of Professional Wrestling.

He changed the landscape of wrestling twice – in the 80s with Hulkamania and in the 90s with the nWo.

While Hogan has many supporters, there are also people that don’t like him at all, and one of them is Bret “Hitman” Hart.

Bret’s dislike for Hogan stems from the fact that Hogan refused to drop the WWF Championship to him in 1993. Instead of losing to Hart on his way out of the company, Hogan lost the WWF Title to Yokozuna.

During a recent interview with ‘q on CBC’, The Hitman ripped the Hulkster’s wrestling style and said the following:

“When you look back today, they don’t wrestle like Hulk Hogan anymore. They wrestle like Bret Hart. Wrestling’s all about action and speed and telling the story.”

Hogan gets criticized for his wrestling style and some fans (especially younger fans) think he can’t wrestle. However, during his time in New Japan Pro Wrestling, Hogan proved without a shadow of a doubt that he can wrestle. His style in NJPW was completely different from his WWF style.

Hogan was smart enough to know what he needed to do to draw in the World Wrestling Federation and become a household name, and take the wrestling business to new heights, something he doesn’t get enough credit for in this day and age.

Also Read: “He had money dripping off of him” – Hall Of Famer On Seeing Hulk Hogan For The 1st Time Ever

It was broadcasted from the New Orleans Arena in New Orleans, Louisiana and featured pre-taped matches & storyline segments on the road to the ‘WWF Royal Rumble 2002’ PPV.

3. The Undertaker vs. Matt Hardy